This bonfire is not for roasting marshmallows...

You may remember that back in December, the kids and I, with the help of a Japanese student, created a shimekazari, or a Japanese New Year wreath, which is part of the Japanese holiday tradition. Ours turned out to be not so attractive: 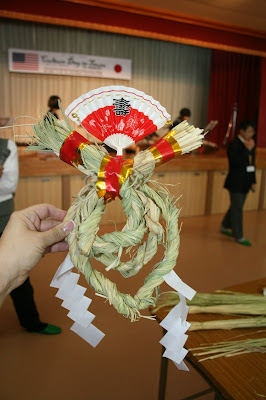 It should look more like this photo I pulled off of Google Images: 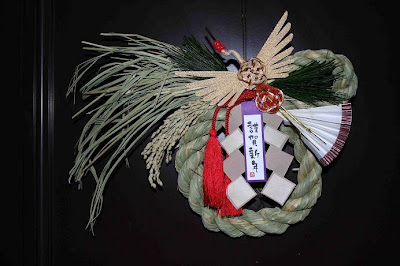 Yeah, the crafter in me just doesn't really like straw as a medium, I guess. I couldn't get it to wind tightly, evenly or in a circle. I didn't realize at the time that I was going to burn it after the new year... it's a good thing because I may have been tempted to toss it in a fire early. Instead, I just sucked it up and hung it by my front door. After the emotional year our family had in 2012 (not all of it bad, of course), we need some happy calm this year,and I'll take all the help we can get, even if it means to hang my embarrassment of a wreath where people can see it.

Miho, a fellow military wife who happens to be Japanese, told us that it is Japanese tradition to burn the shimekazari after January 11. A fellow Japanese scrapbooker, Chie, told me that this tradition is called don-to. Miho let us know about the traditional bonfire that the City of Iwakuni was hosting along the river near the famous Kintai bridge (the bridge that can be seen in the background of our Christmas card photo and at the top of my Facebook page) on Sunday evening. Of course, I want to experience everything I can while here in Japan, so I bundled up the family in layers and drug them out to Kintai bridge.

It had been cloudy all day, but not a drop of rain... until we stepped outside to head to the bridge. It began to sprinkle. Making sure we had umbrellas on hand, we braved the elements and drove the 15 minutes to the river. After parking along the river gravel, we walked over to where some large tents had been put up: One was where the Shinto priest was conducting the ceremony for the faithful, the other tent was serving a traditional Japanese dessert. Miho told me that this dessert is a rice cake topped with a sweet bean broth. It is eaten on the same days the bonfire because a New Year's decoration called a kagami mochi is made up of rice cakes with a tangerine, or mikan, is opened and eaten on January 11. Here's another photo I got from Google Images: 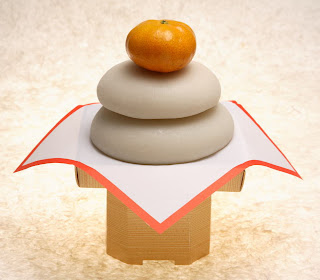 Once you have opened the decoration, and have eaten your fill, you have a ton of left over rice cake. So to get rid of it, you make this dessert for your friends and family on bonfire day. Kind of like Thanksgiving leftovers turned in to turkey soup and sandwiches, I suppose. Here is my dessert and Rodney, me and Xan eating it (as well as spilling half of it down the front of his coat, which I still think he wore to school today. I looked for it to wash it and couldn't find it.): 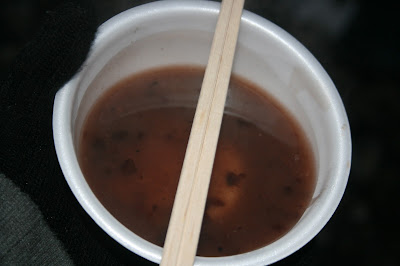 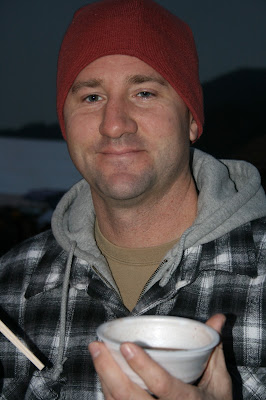 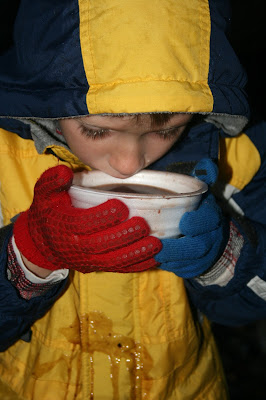 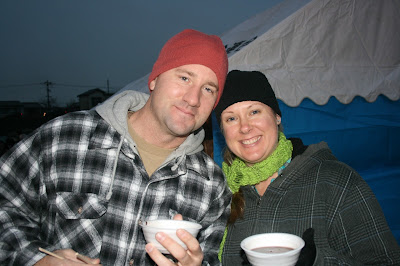 I really liked the dessert - I have a huge sweet tooth. But it was a little too sweet for Rodney and Will. This is also when I picked up an admirer. There was a middle-aged Japanese man who came up to me and began talking to Miho, who was standing next to me. Long story short, this gentleman was a little "off" mentally, and had a soft spot for American major league baseball and blondes from California. Through her translation, Miho told me he asked questions about why Minnesota's stadium doesn't have a roof, who my favorite Angel's baseball player was and if the two boys with me were my children. Yes, sir, and the big guy next to me is my husband. But he had no interest in talking to Rodney, who drifted off and left me and Miho alone with my admirer (thanks, dear), who, before we escaped, let me know how beautiful he thought I was. It was a nice boost to the ego, but I know it was simply because of my long, blonde hair... Xan has been getting touched on the head more often lately. Touching light hair is said to bring good luck to the Japanese.

Xan was the lucky one who got to throw our wreath in to the bamboo bonfire structure with the thousands of others: 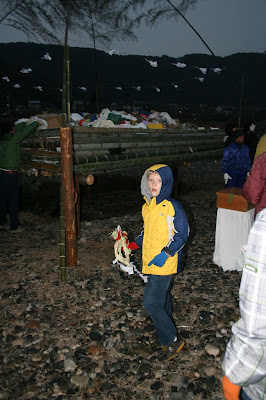 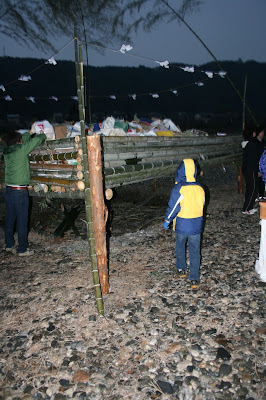 The ceremony performed by the Shinto priest lasted about half an hour. I am not sure what was done or said, but here are a could of pictures: 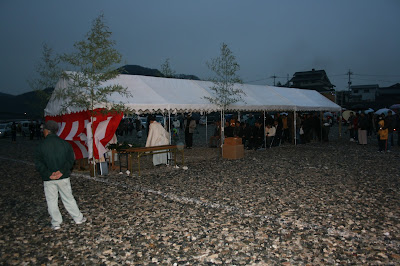 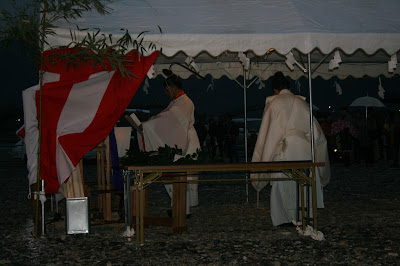 The priest then came over to the bamboo structure and said some owords while waving a tree frond. Miho said that the mayor of Iwakuni also had a speech. A select group of Japanese then brought torches over and lit the structure on fire. The tiny white dot in the background of these photos is the famous Kintai castle that overlooks Iwakuni. 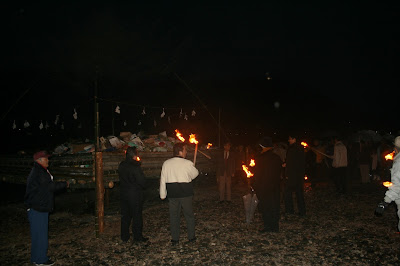 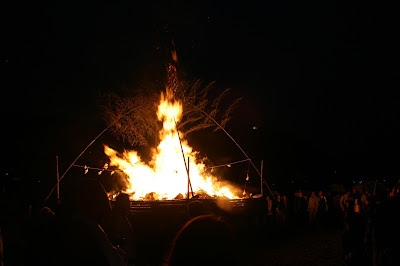 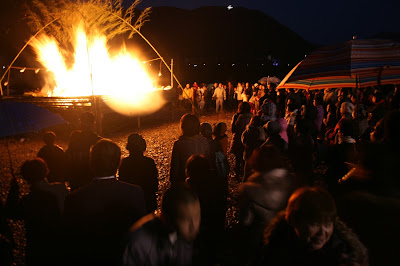 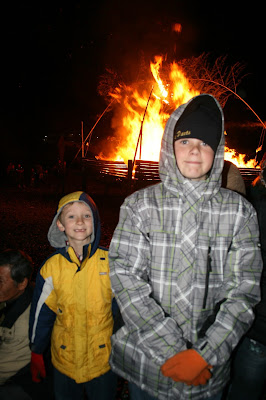 You could feel the heat and hear the loud popping as the air escaped from the different sections of bamboo as it burned. There was burning paper and ash flying all around, but kids (not mine, who had the sense to stay back, thank goodness) were still allowed to run around the fire and play. Not at all like the States, where there would have been hired security there to keep people back to avoid a lawsuit. Through it all, the sprinkling continued, but it didn't actually start to rain until we were in the car heading out of the gravel parking lot. Hopefully this means that we will have a lucky year this year...
Posted by Jessica Guthrie at 9:33 PM