Unfortunately, the Scrapbook Loft in Jacksonville, IL, was closed on the Saturday I stopped by (Dec. 30). Housed with a local luncheon teahouse, the hours appear be Monday through Friday. Disappointing for those scrapbookers who work a regular work week, I'm sure. And, a fault with the store, too, since most croppers need hubby (or other relative) child care while they shop. Plus, working croppers tend to have more expendable income to spend at their favorite LSS! I hope that the Scrapbook Loft is open the next time I am in town ... I'd love to see it!

Also to note: Scrapbook Wonderland is no longer in business. This LSS owner used to rent a space in an antique mall, York's Antiques in Jacksonville. I have noticed that the store is still listed on web site store locators, so I thought I'd put the word out to whomever might read this and care. :)
Posted by Jessica Guthrie at 2:33 PM 2 comments:

About an hour away from Rodney's family homestead (where I am spending much of my holiday break) is Quincy, IL. While we were there to shop and look at Christmas lights Dec. 27, I just had to stop in at the local store, Scrappin' It. It has been open for almost a year now, and this is the seond time I have visited to store, the first time being last May. From the looks of things, the store was doing quite well. The only store in the city, aside from big box stores like Hobby Lobby and a small JoAnn's, Scrappin' It has lots of the newest stuff and many of the older favorites. If I was stranded in Quincy and ran out of scrapbook product, I would not be disappointed in Scrappin It's variety. The only bummer was that they were out of my favorite Zig 2-way glue in the 1-inch barrel. But, then again, that's not really a surprise anywhere! It's popular stuff and EK doesn't exactly release and ship it out in a timely fashion, apparently.
The only true bummer I found is that Scrappin' It is a small store and product is organized, but confined to small areas all over the store. No more than a dozen or so people could shop comfortably at one time and there was a lot of focus on embellishments, rather than paper, but depending on your personalinterests, that may not be a bad thing. There was still plenty of paper variety, but I don't think any entire line (except for the new Magnolia) was represented. Occasionally I felt like product was attacking me, but I can't fault them for trying to maximize a small space as they start up their store.
I didn't see their crop space, but, when you look on their web site calendar, there are a variety of classes and crops available.
The gals behind the counter said they plan to attend CHA in Anaheim in January, so I look forward to possibily meeting up with them again there! Best of luck to them!
Posted by Jessica Guthrie at 2:13 PM 1 comment:

Not sure if you all already know this, but there is a new scrapbook magazine being launched next year - Scrapbook Dimensions. I got an email about it today, but I'm not sure how they got my email address. The magazine's focus will be on hybrid scrapbooking, the mix of traditional and digital scrapbook techniques. I've already signed up for my free trial issue to see what the magazine will be like and you can, too, by going to the link above. There is also a survey you can fill out to assist them with content. The survey also gives you a better idea of what information the magazine might have. Even if you've never considered becoming a digi-scrapper, it sounds like they'll have some great tips on photo manipulation and altered projects. With the demise of Scrapbook Answers, it will be fun to have a new magazine on the market to try.
Posted by Jessica Guthrie at 2:05 PM 2 comments: I'm only teaching one class in January, giving myself a break while my kids visit my in-laws in Illinois. The class project is a love-themed wire bound mini book, perfect for your significant other this Valentine's Day. It can also be slightly modified for a beloved family member or special friend. It's 18 pages, with lots of interactive elements, like hidden journaling, tags and more. The class is 6-9 p.m. Thursday Jan. 25, 2007 at Angel's Scrapbook Garden in Mission Viejo. Click on my class samples link after Jan. 1 for more information. Questions? No problem ... email me ay scrappingclasses@yahoo.com. Hope to see you there!
Posted by Jessica Guthrie at 10:08 PM No comments: I know ribbon storage has been an issue for any scrapbooker who, like me, has an addiction to ribbon. As anyone who has cropped for an extensive amount of time with me knows, I have six Costco pretzel barrels that hold all my ribbon. I just punched holes out of the lids, dropped the ribbon into the barrel and then fed the ribbon through the holes. Now I can not only see all the ribbon I have, but I can also just trim off the length that I need - it's ribbon conservation!
Posted by Jessica Guthrie at 9:37 AM No comments:

My scrap buddies Nan, Judy, Naomi and I met at our LSS for some pre-holiday scrapping. All but Nan were working on Christmas gifts, but we still managed to relax, chat and not think about the stress of work, the holidays and more. We tossed around the idea of organizing a weekend crop at a local hotel here in south OC. Just for friends and friends of friends, but the more the merrier! Maybe March would be a good month , after the OC Scrapbook Expo at the Costa Mesa Fairgrounds in February. I want to keep the costs reasonable, the goodies, well, GOOD, the scrappin' productive and the fun HUGE! Anyone interested? Let me know ...
Posted by Jessica Guthrie at 10:50 AM 3 comments: 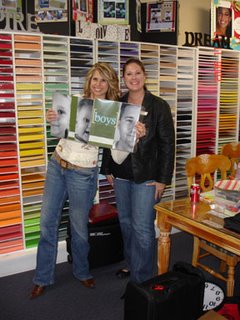 Right now, this is my favorite scrapbooking moment: Lisa Bearnson from Creating Keepsakes magazine (among other endeavors she's involved in) chose MY layout as a winner last month. She happened to visit a local scrapbooking store, Timeless Treasures, and cropped with some lucky scrappers. There was a page layout contest and I was one of the selected winners who got to have lunch with her. Plus, she also sent out her new mega chipboard kit to the winners! (By the way, if you happen to ever see this, thank you, Lisa - I tried to find an email or mailing address for you to send you a thank you note, but couldn't find one. Understandable, as I'm sure you prefer to enjoy your privacy when you can get it!)

Well, I think I'll have about three viewers of this entry in the next few days. One will probably be my scrappiest friend, Nan, and the other two will be relatives - just not sure which ones!

My family blog has been a big hit with family friends and it has 1) saved me time and postage trying to send pictures to everyone and 2) relieved the guilt I feel when I don't get the promised pictures of the boys to those who ask.

So, now that I'm running around like a crazy lady, doing all sorts of scrappy stuff, I thought I should start a blog about it. Not that I expect anyone to really care (except for Nan and the relatives, of course) but I'm hoping it will give me a place to share my ideas and excitement for the hobby with other scrapbook enthusiasts!

So, welcome, and thank you for stopping by!
Posted by Jessica Guthrie at 5:53 PM 2 comments: