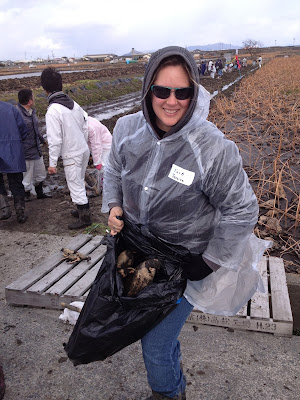 I headed off on another Cultural Adaptation tour sponsored by the base today . Have I mentioned how much I love these excursions? Free or at minimal cost, these trips feature Akie as our fearless tour guide and they are always educational. This trip was no exception. I learned that I am - literally - not built to be a lotus root farmer.

I wrote on my Facebook page this morning that I was heading out to go lotus root digging and that it had been described to me as mud wrestling with vegetables. I had no idea how true this was going to be.

It was a typical winter day for Iwakuni... partly cloudy with highs in the mid-40s. The wind was gusty now and then, but we weren't heading out to the muddy lotus root fields until after lunch, so there was plenty of time for the winds to die down and the day to get warmer. We traveled a mere five minutes from base by bus, to the Iwakuni Wholesale Market. There they have a large teaching kitchen, and that is where we learned about lotus root, its history in Iwakuni and got to taste some of the more popular dishes that can be made with it. 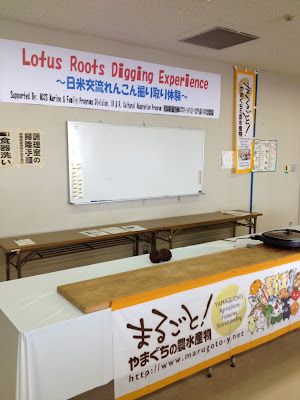 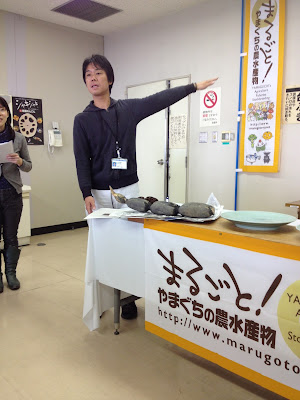 As we walked in to the kitchen, the dishes were were going to try were being created from scratch. Everything looked so fresh and we had to stare at it and smell it for two hours before we got to eat any... 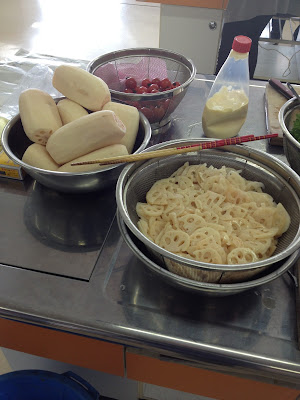 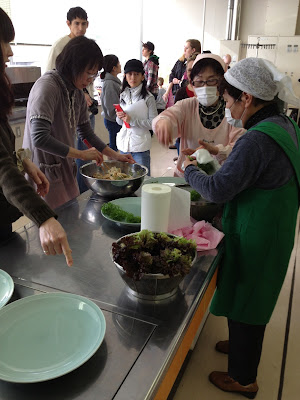 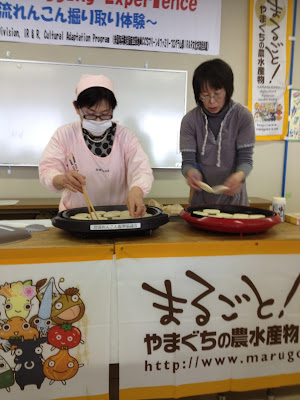 During the time we waited to eat, we learned the following, which I think may be of interest to some of you:


There were three dishes prepared for us: Lotus Roots Stake (I think they meant steak, but I can't swear by it.), basically french fried lotus root: 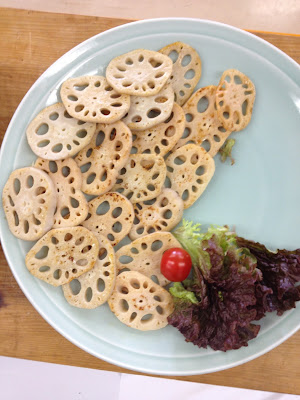 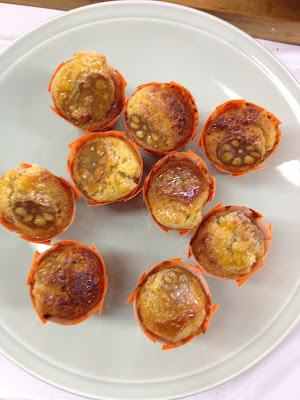 All of it tasted great! They even gave us the recipes so we knew what to do with out lotus root once we got it home. 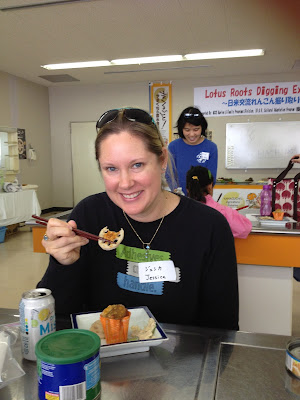 And after lunch, things started going downhill for me... The weather did not warm up and the wind did not die down. I, like the rest of our group, put on plastic coats and pants that we got at the Daiso, as recommended by our fearless tour guide. However, this is apparently the American way of doing things because none of the Japanese there to dig with us were wearing getups like ours. So, I was a Japanese dork for a day. I could handle that as long as I stayed clean. Which I did not... But before I get in to that, I first want to show my Illinois family their Japanese counterpart. Behold, a real Japanese farmer (he's the one with a microphone and with a good sense of humor. One of his parting phrases in English after rattling on in Japanese for 10 minutes was "Be nice to the veggies, OK?" Sure, sir, as long as they are nice to me... which they weren't.):

Also for the Illinois family, a lotus root field "Gator" with treads: 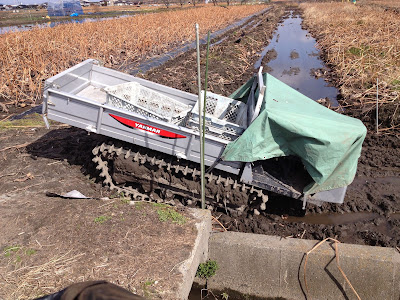 This entire event was sponsored by the City of Iwakuni Lotus Root Promoting Council, so the local Japanese press was there: a newspaper reporter, who interviewed me earlier in the day, and two different TV station reporters with cameras. This will be important to know later in the story...

So, I don't have pictures of what happened next because I was too busy trying to extricate myself from the mud, but here is what happened after the farmer released us into his field: I got stuck about 10 steps in to it. I literally could not get my boots out of the mud and a nice Japanese man in his 30's had to come rescue me. With his help, I got my feet unstuck and moved further in to the field, where the actual roots were. See those red flags in the distance below? That's where I had to walk to so I could actually check "lotus root digging" off of my bucket list. 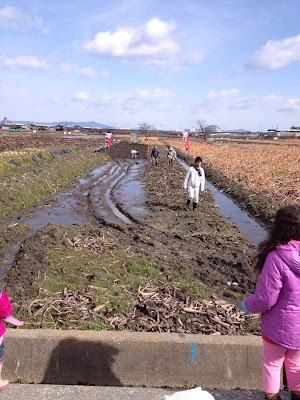 I managed to get to a lotus root by walking quickly so my feet did not have time to get stuck again. I dug out half of this root: 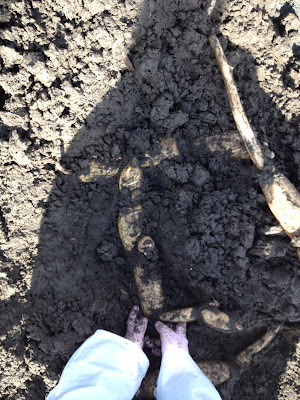 That was my entire contribution. About three minutes worth of work. Then I realized that my feet were sinking deep in the mud. Giving up, I used my hands to yank my boots out of the mud and turned to trudge back to the much safer asphalt road. I trudged the wrong direction, I guess, because I immediately got stuck and pulled my left foot completely out of my new $7 rubber boot I had bought for the trip. (It was a men's boot because it was the only one that fit me at Fuji Grand, the department store in downtown Iwakuni. The pair cost 1,290 yen, or about $14. Maybe I should have bought the $35 pair.) I got my foot back in to the boot and yanked the top of the boot to get it loose. This worked...but in the meantime, my right foot became submerged, almost to the top of my boot. A nice Japanese gentleman in his 50's came to my rescue, yanking my boot out of the mud. I was saying "Arigato!" a lot at this point. Once free, I trudged as quickly as I could to the edge of the field to try and get on top of the mud barrier that seemed so safe and dry. Wrong! It was just as soft as the field and I immediately became stuck, lost my balance and landed on my butt in the field, ripping the rear seam of my 100 yen plastic pants as I did so.

Of course, like any good reporter worth her salt, one of the TV camera ladies saw my predicament and immediately rushed over to me. Having the reporter's mind I have be trained to have, I knew she was not coming over with her expensive camera to help me up. However, she did ask, "Are you OK?" When I assured her I was fine, as I laughed with embarrassment (it was a laugh or cry moment... I chose to laugh), of course she video taped me on my butt in the mud, and then the assistance I got from one of my fellow Americans and a nice Japanese man in his 40's. I have been told that this may (will) air on Feb. 12 on the Yamaguchi prefecture's (the state/county Iwakuni is in) cable show. Awesome.

But the fun wasn't over yet! I continued to make my way toward higher ground when I got stuck again, losing my balance and landing on my butt for a second time. There was no one around to assist me, my butt was already wet and muddy from being on it in my ripped plastic pants before, so I figured I would just take a picture of me and one of the newest offending boot. Here you go:

With the help of two nice Japanese men, our fearless tour guide Akie, and a large rubber crate to sit on to put my boots on after they were extricated from the mud one more time, I finally made it to the safe firmness of the asphalt.  Knowing I would find this funnier later, I asked a fellow American to get a photo of me post-lotus root digging. Here is what she got: 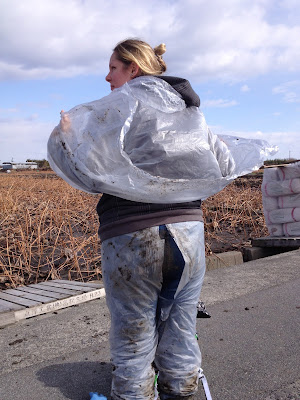 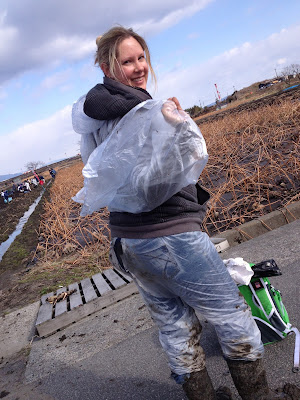 I fought the renkon, and the renkon won. Apparently losing 45 pounds was not enough to be a lotus root digger. No problem. That's why I went to college. I like heat and air conditioning and am not fond of mud. However, as I am sure you can figure out, I like to eat. So, I took my frustration with cold mud and plastic pants and turned it in to meal for the boys (Rodney is out of town for a couple of weeks in a tropical climate for work... lucky him) and myself.

Back at the lotus root field, when all the roots had been dug by the other, non-sinky people, the harvested roots were divided in to piles and numbered for a lottery. We each drew a number and that was the pile you took home. They left them out in the field, which I was not going back in to. I was going to just give up my pile, when a fellow American offered to grab my roots for me (if you happen to be reading this Sidny, thanks again). Here is what 15 pounds of washed lotus root looks like: 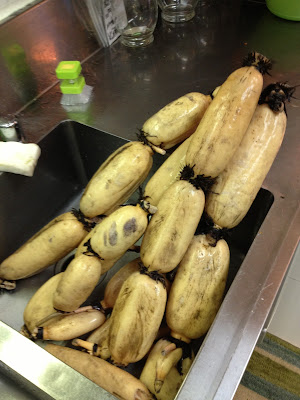 That is enough to feed a Japanese family for a month. Just kidding. Or maybe I'm not. I have no idea how much lotus root a Japanese family could eat. I also have no idea how much my family would eat. Side note: Lotus root is considered a lucky food because you can see through it. It is eaten during the New Year celebrations because it is said to bring you good future perspective. My future perspective will not include more lotus root digging and that is good. I'm sending Rodney out with the kids next year. 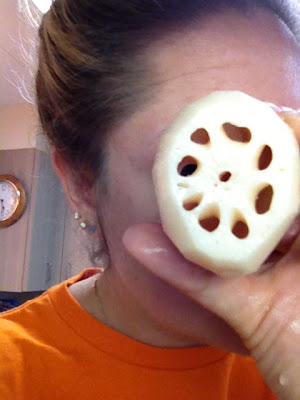 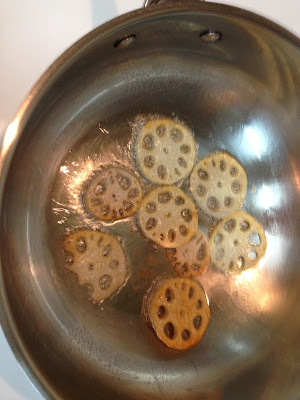 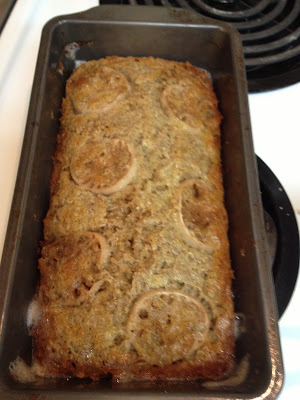 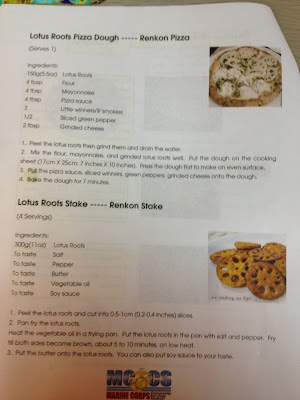 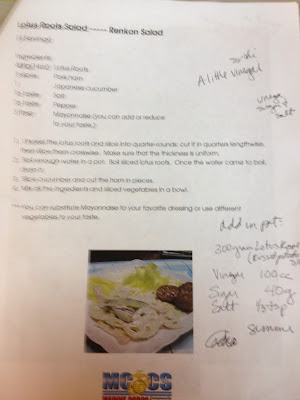 The boys were none too thrilled. 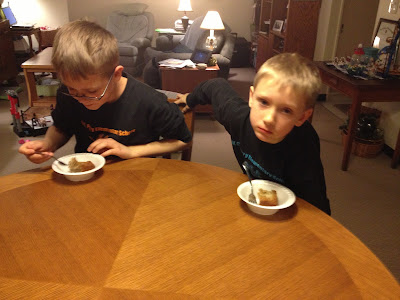 The boys do want me to make Lotus Root Tempura. I better find a recipe... lotus roots only last one or two weeks and I have 15 pounds to get through...
Posted by Jessica Guthrie at 5:35 AM

My daughter was a special guest at the local rice festival. As I recall, they had to stand in the water...before she found out there were leaches in the water. Not much you can do when you're the special guest"

So true! And I was sick the whole weekend. Maybe from embarrassment, but probably from being damp and cold. ;)

The french fried renkon looks awesome. I'd love the recipe! BTW, I'm in Hiroshima prefecture myself! Isn't it great here?

The french fried renkon looks awesome. I'd love the recipe! BTW, I'm in Hiroshima prefecture myself! Isn't it great here?

Hi Jessica,
i am working for lotus farm in Australia but I do not know the way that Japanese farmer harvests their lotus root. Could you please post some picture of their machine. Thank you so much!