Eating our way to, through and from Hiroshima... 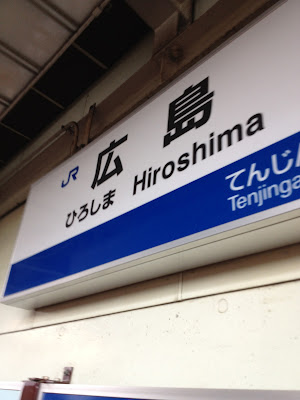 It wasn't really the plan to eat and drink our way to, through and from this historic city in Japan, but that is what ended up happening, Of course, there was plenty of things to SEE as well, and I tried to capture a lot of the things I found interesting. The interesting happened the moment I shut my car door. We had just parked in a seven-story parking structure nestled between a block of department stores, paying 100 yen an hour so we had a ride from the Iwakuni train station to base. When my car door shut, there was no echo. No loud engine noises. No honking. No loud stereo with bass and speakers that cost more than the car itself. It was eerily quiet, but there were plenty of cars around. I looked up and the ceiling of each level of the structure had acoustic foam sprayed on it... the eerie silence was explained.

Eating commenced just moments after we parked. The train and bus station is less than 5 minutes from the parking structure and on the corner of the train station is a doughnut store. I walked past it, as doughnuts are a breakfast fare, in my opinion, but the men in the group had other ideas. My spouse, Rodney, and fellow Marine Ray, took an immediate detour in to the doughnut store, aptly named Mister Donut. The only other woman in the group, Yolanda, and I continued our focused mission: To purchase train tickets to Hiroshima.


While there are automatic ticket dispensing machines available for fast train ticket purchases, Yolanda said using the window with an actual person helping you is easier for those of us not fluent in Japanese. I followed her advice. After all, she and he husband, Josh, were the seasoned Japan travelers, I am a mere novice. The round-trip ticket cost for adults was about 1,500 yen, Will was half price and Xan was free. So, the entire train cost for my family of four was about $47.25. The train ride is about 45-50 minutes, one-way.


To meet the train, we had to go up stairs and across a covered foot bridge to the right track. All along the footbridge were colorful advertising posters.


Below are a few pictures of the view out my window. Most of these were taken near Otake. 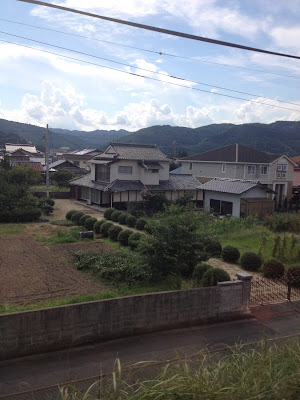 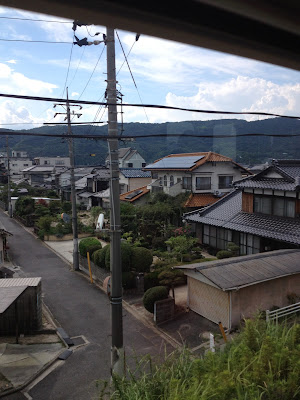 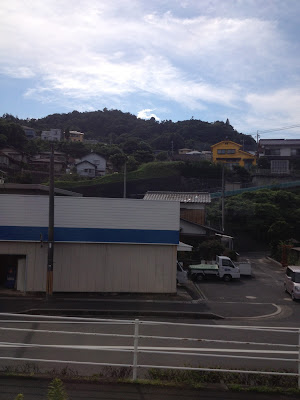 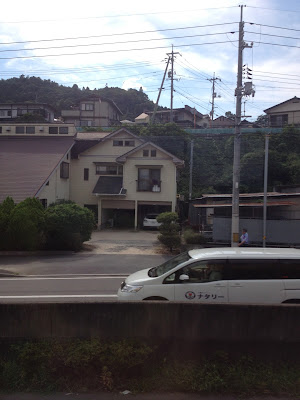 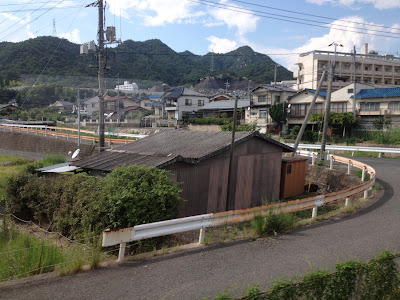 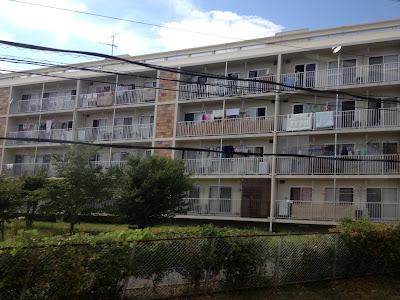 After about 45 minutes of jerky, swaying train ride, we arrived at the Hiroshima Port, where all of the public transportation in Hiroshima begins and ends. Trains, bullet trains, buses, taxis... they are all here at this hub. To get to where we were going, Peace Park,we needed to take a bus. But first we had to get outside the train station and to the bus stop.

I am sure it was by design, but as we got off of the bus and to a dozen steps in to Peace Park, one of the first things you come upon is this rock and tree, partially obscuring the view of the A-Bomb Dome. This park has been created as a memorial to the victims of the American A-bomb that was dropped there, as they were the first victims of a nuclear attack. The park promotes world peace and urges countries to end the manufacturing and use of nuclear weapons. The information provided is very factual, and does an excellent job of not placing blame. As Yolanda explained, there is more of a sense of "What can we learn from this and how can we prevent it from happening again?" 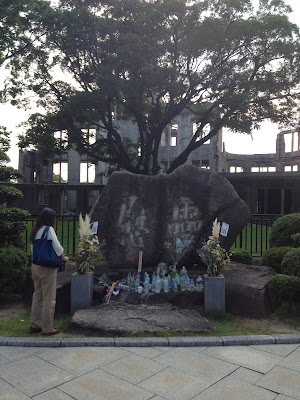 A large placard stands in front of the A-Bomb Dome. Here are each of the four sections, with the English translations:

We moved on across the bridge, where the A-Bomb Museum is. Although we did not have time to go to the museum, I am looking forward to going and learning more.


The memorials were very well done and there were many tourists out, despite the heat and humidity., As a matter of fact, Yolanda took a Spaniard couple's photo as we crossed back over the bridge to where the dome was located. Across the street and adjacent to the Peace Park is Hondori Street, where we spent the remainder of the evening. This is a busy outdoor mall, with just about any kind of store you can imagine, including ones you might recognize. 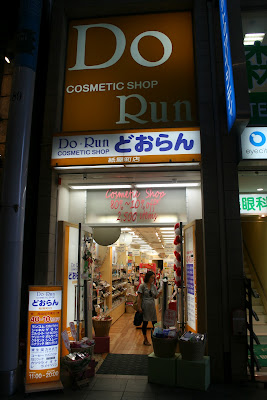 Here are a couple of places you might recognize: 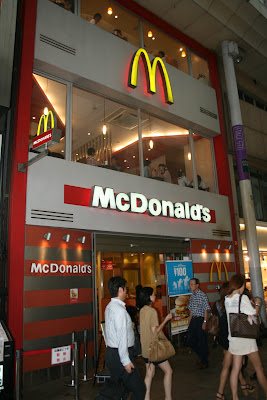 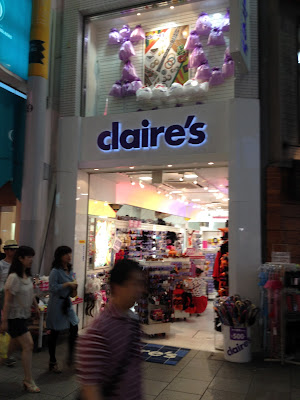 This is where we ate dinner, Andersen's. It is a buffet-style place, but you pay for each item you get. They have different styles of food you can choose from, and then they cook it fresh and bring it to your table. 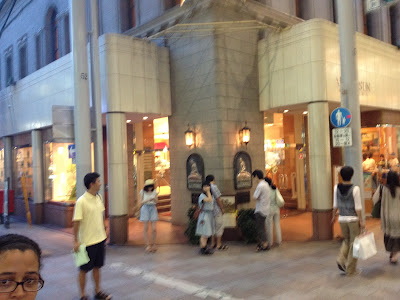 One of the features that night was this balloon artist in the "Where's Waldo" shirt and balloon top hat. He was very talented and each kid got a balloon figure for free! 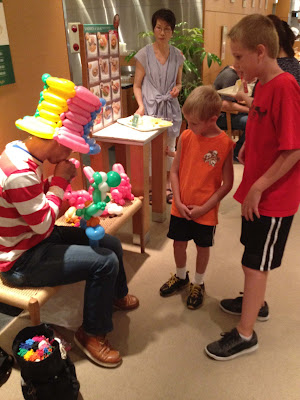 While the restaurant portion of the shop was on the second floor, the first floor had all kinds of delicious things to see and buy. And some fun things to amaze the kids. 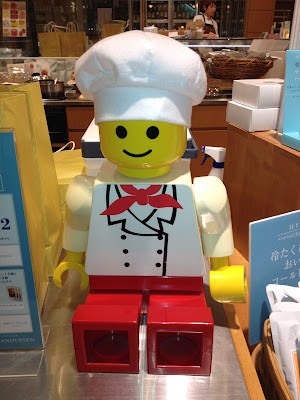 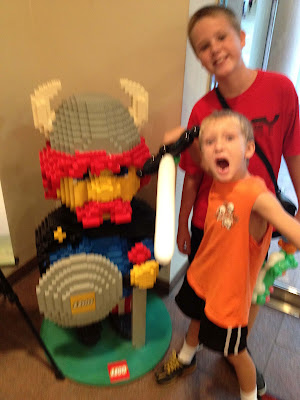 My mother will now be able to visit me in Japan: There are Starbucks in Hiroshima. We stopped at this one and everyone got something, The kids got hot cocoa, Rodney got a house blend ice coffee and I got the biggest black iced tea they made. With Sweet 'N Low, of course! 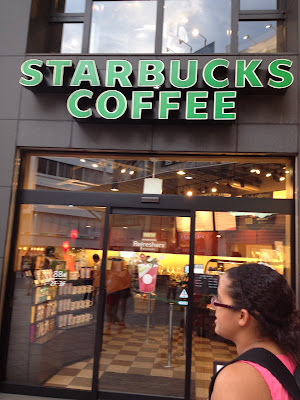 We walked around Hondori Street for awhile longer, but then everyone wanted dessert. So dessert we got, from a cute corner sweet shop, and these eclairs were delicious! I got the one with berries. 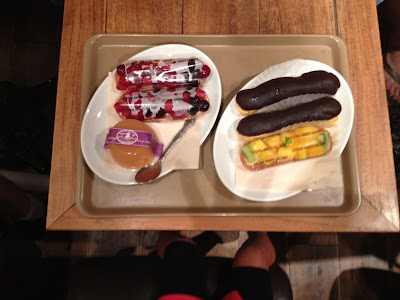 After dessert, everyone was full and tired, so we headed back to the bus stop to take the bus to the train station, and then boarded the train bound for Iwakuni. We made it back to the garage about 5 hours after we left. We paid 500 yen to unpark our car.
Posted by Jessica Guthrie at 11:33 PM

This is really a great blog post with thanks for sharing this academic info.. I’ll go to your internet Bathtub Taps regularly for some latest publish.

Cheap Taps UK are elegant fixtures in the bathroom that increase water pressure, which in turn increases the speed. Waterfall Taps have emerged as a necessity among today urban population and different types of Bathroom Sink Taps are being launched to suit individual needs. Taps Sale allow users to adjust from delicate to fast sprays. Bathroom Accessory are designed to mix and match almost an infinite combination of variations. They bring luxury and convenience to any bathroom. Modern
Bathroom Sink Taps push the water through an accelerator fin that powers up and increases the water velocity. The result is a highly boosted flow of www.uktaps.co.uk

Handheld Cheap Taps (with hoses) have becomes extremely popular. These can either be Cheap Taps UK like a standard showerhead or be pulled down and directed by hand.
LED Taps : Factors to Consider Before Buying Kitchen Taps come with enhanced functionalities, including adjustable spray from a Bathroom Accessory fine needle spray. These come in innumerable designs and add elegance to any Waterfall Taps. Certain factors that one should consider before purchasing a Antique Taps are:

Stainless metal, chrome, robinet bronze or polished brass - each faucet is a lot like a breathtaking masterpiece of robinetterie cuisine, simply delaying with send the style quotient inside the Robinetterie Antique galloping south. There are contemporary, traditional plus classic faucets that insert a dose of glow into any interiors.But Accessoires de salle is very the eye-popping, jaw-dropping costs that rob the display. The fabulous discountson these fixtures are the only succor when all of your tries to increase the appearance of the Robinetterie Vasque on a shoe-string budget have proven feckless.

Waterfall taps nowadays became more and more popular in ordinary families, it is comfortably when using a waterfall spout to washing. Installing waterfall taps can make your house more fashion and attractive.Best Selling http://www.cheaptap.co.uk/waterfall-taps-c-36.html For You with Great Quality and Fast Shipping, Choosing a suitable waterfall kitchen or bathroom tap for your house or work place.