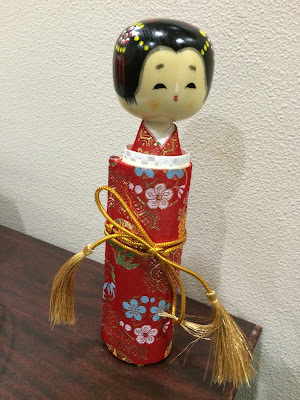 So, there was a phenomenon on the base here in Iwakuni, something reminiscent of high school yearbooks. I think I first heard about this about six months after I arrived here, as the first people I had met and had gotten to know started to move back to the States.

One woman simply asked, "Have you signed my sayonara doll?" and shoved a skinny brown cardboard box at me.


Uh, no. I have not signed your, um, doll. Do I want to? What is this thing? I imagined using a Sharpie to write across a baby doll's face. Hmm... that could be fun...

Ultimately these sayonara dolls are kokeshi with a bonus feature: they unwind to give the owner about five feet of parchment paper for their friends to sign. By the way, Sharpies are not recommended because they can bleed through.


Now, I don't know what the Japanese natives use them for, although there are bride and groom dolls, so maybe bridal wishes? However, the American women (maybe some men...? I haven't been asked by a man to sign his doll, but I do not want to appear sexist here) use them to send farewell messages to the friends, co-workers, and close acquaintances they have met during their brief time here. Often a group of friends or a squadron's spouse organization purchases the doll for the person leaving, everyone signs it on the sly, and then the doll is presented at the going away dinner or party for the departing person.

But there is a problem with this tradition: Some of your friends leave before you do, so you end up signing their doll, but they aren't around to reciprocate when you leave. 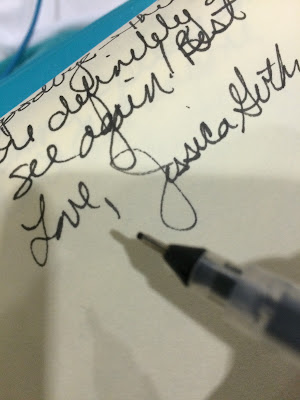 Or, in my case, most of them leave before I do. That is not only depressing, but would leave me with a very naked sayonara doll.

At the suggestion of a fellow Marine Corps wife, I actually purchased myself a doll a couple of years ago. As my friends left, I could still get farewell messages from them. Because of this, my doll is far from naked and I still have a few days left in Iwakuni. Depending on how many people you meet and how long you stay, you may actually need to purchase a second doll. Two of my friends, Britt and Gwen, had to do that because they lived here five and eight years, respectively. My friend, Cortney, complained today that there wasn't any more space left on my doll because other people "wrote too big and bubbly!" So, pro tip: Don't hog the paper. Write in a small font and keep your comments concise. ;) 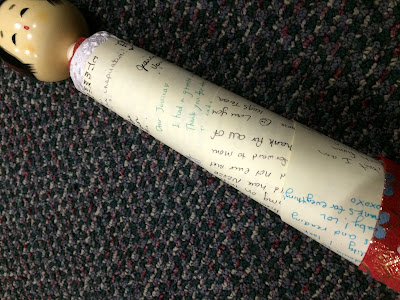 Sayonara dolls are fairly easy to find. The Four Seasons gift shop, located in the Torii Pines shopping area (for those of you who have left Iwakuni, this was the gift store that used to be at the top of the escalator in the MCX... there's now a whole new shopping center past the Sakura Theater that houses the gift shop, barber shop, salon, bike shop, cleaners and telephone office). If you go to the MCCS fall or spring bazaar (usually held in Ironworks Gym) there are vendors there who sell them. I have also heard that there are shops in town that have them, but I have yet to see them. But, wherever you find one, plan to spend between 3,000 and 5,000 yen ($30-$50) and have a tough time choosing between the different colors and designs. 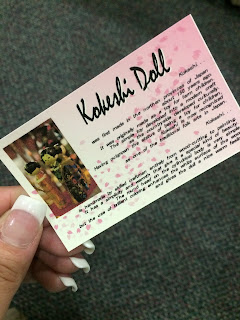 ("Happy Signing" just doesn't fit. Despite the fact we military families are used to moving, it never gets easier to leave the people who have been your family for the past few years.)
Posted by Jessica Guthrie at 6:38 AM