Cops, Lamborghinis and wisteria tunnels... all in a day's adventure. 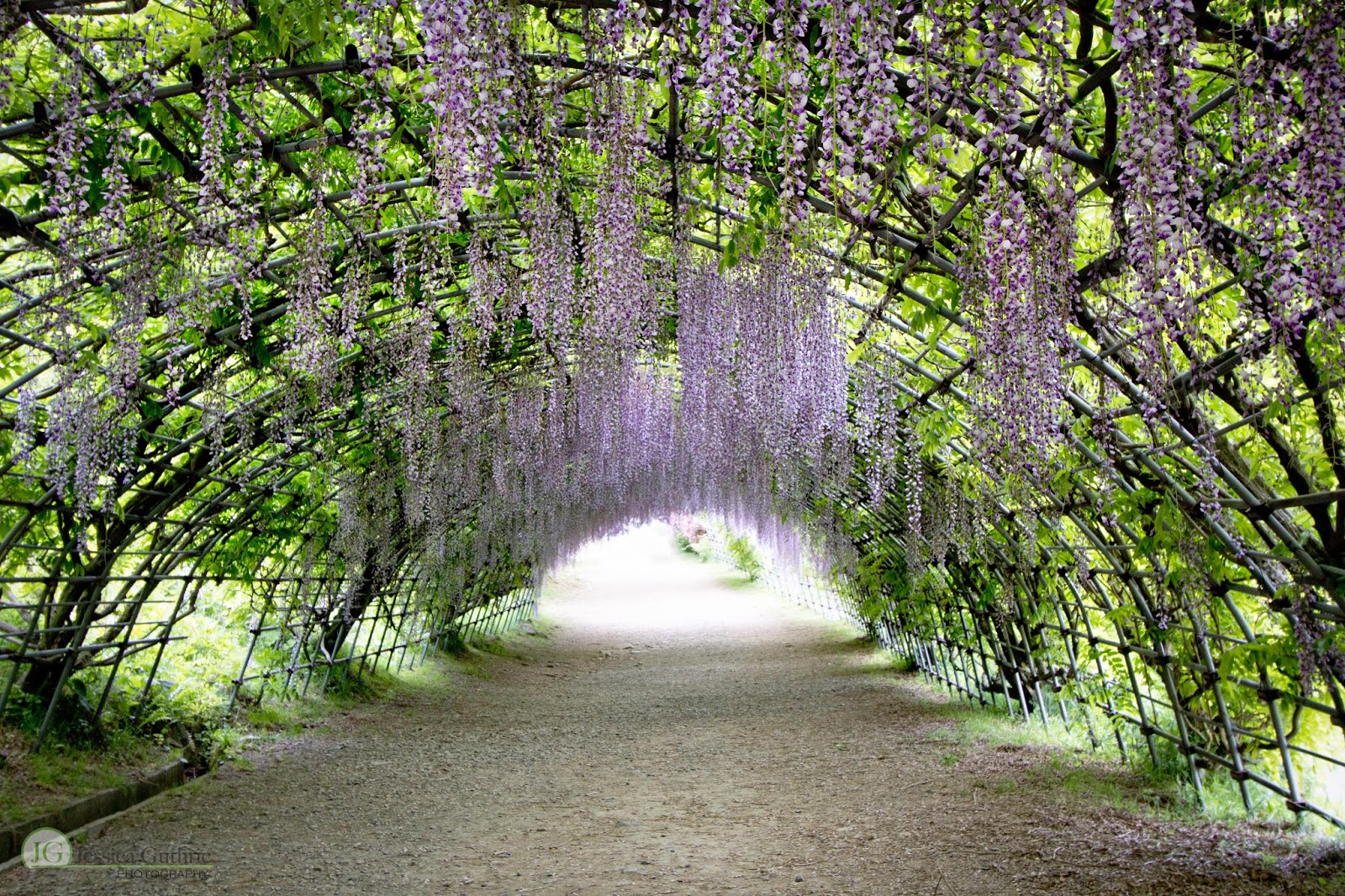 So, you would think that getting to see this absolutely gorgeous wisteria tunnel would have been the big story for the day for the seven of us ladies who made a 6-hour round trip to see it... but it really wasn't.

And you might think that seeing a souped up Lamborghini at a rest stop could have been the highlight... 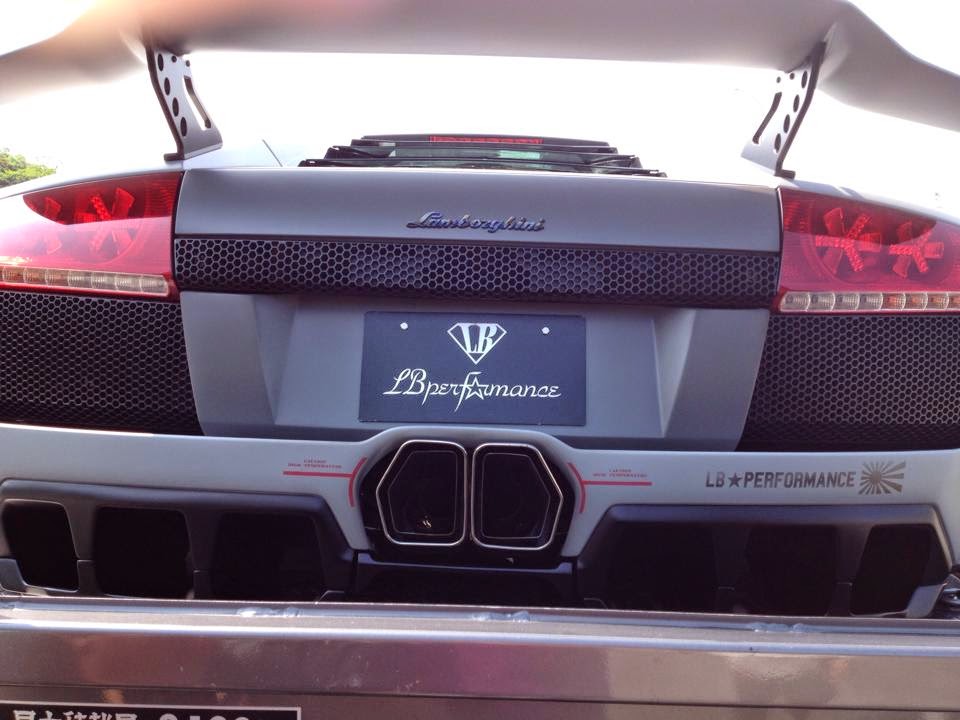 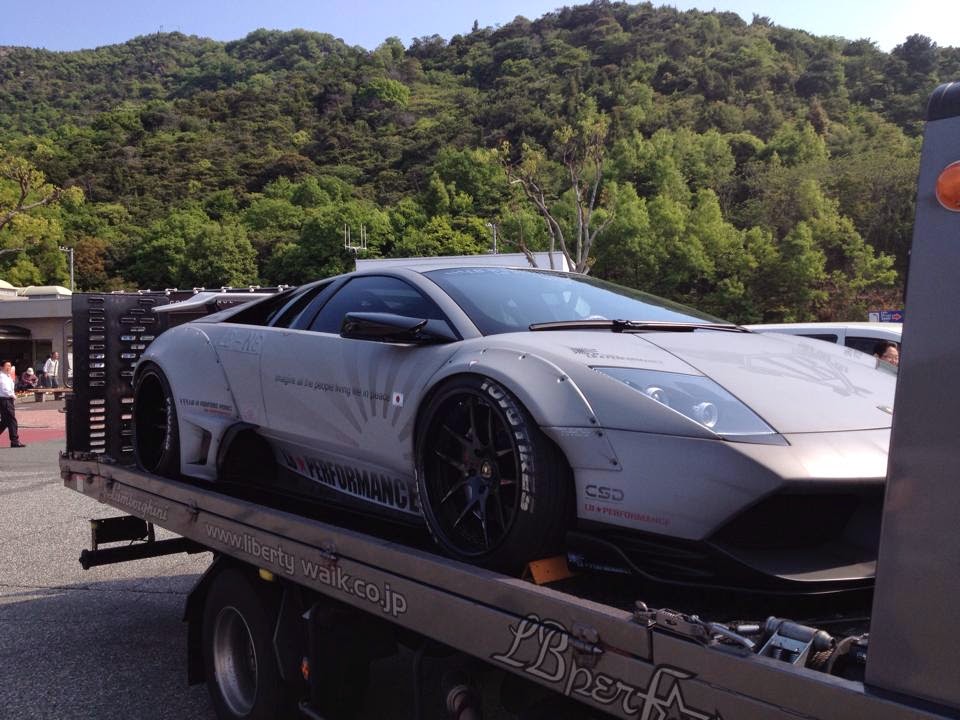 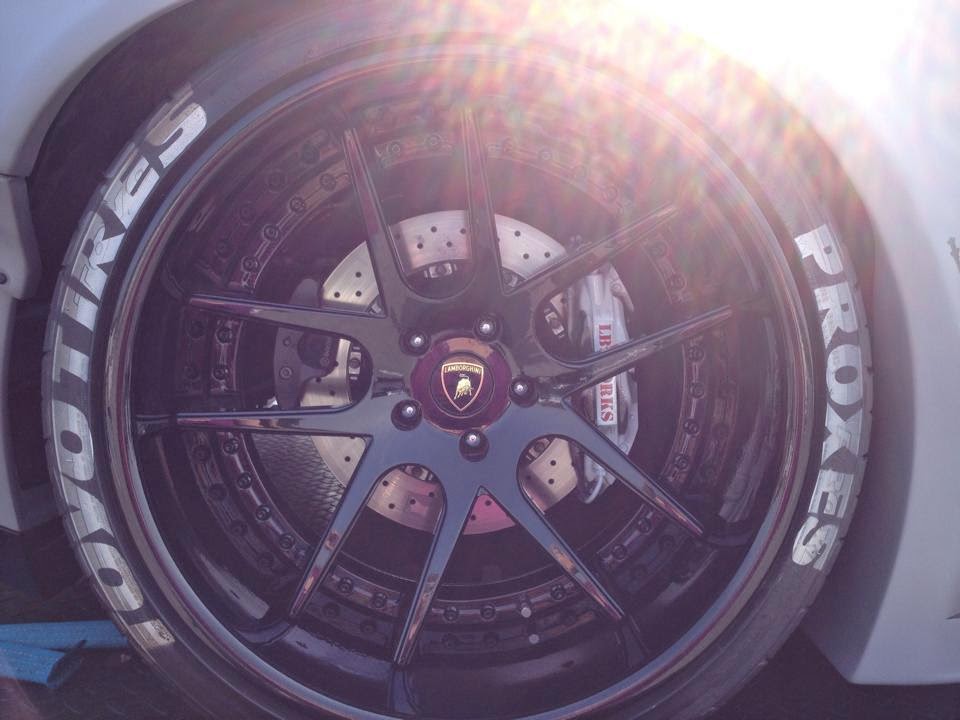 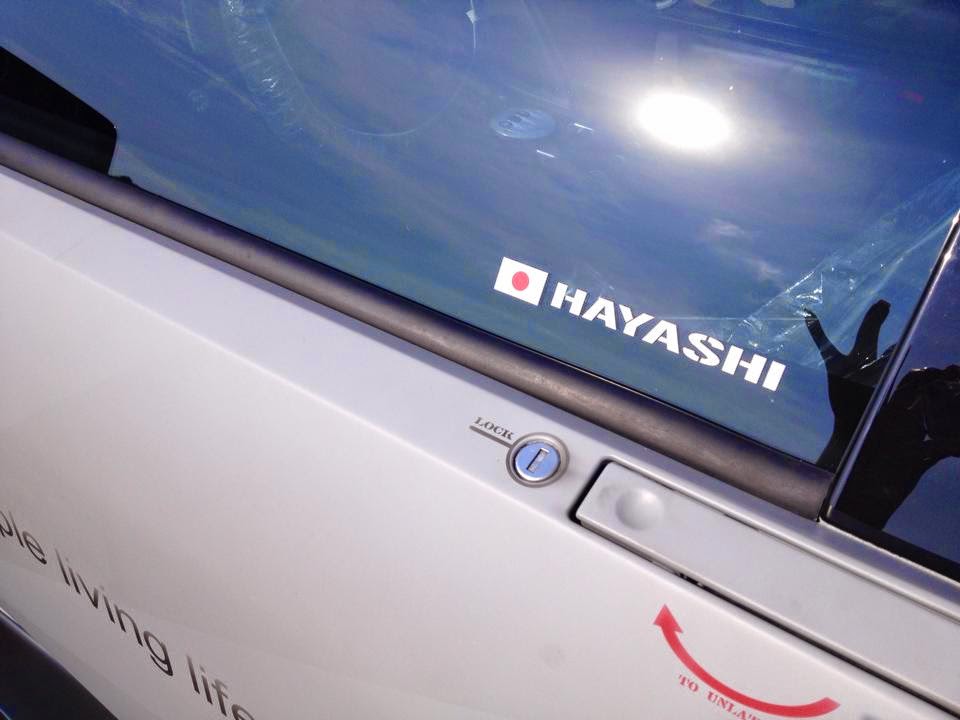 ... but, while it was very cool, and we stood with a handful of Japanese men snapping pictures of it, it wasn't.

In fact, the big story of the day was that I was pulled over by the Japanese highway patrol for (allegedly) speeding. In fact, a few pictures even made it on to Facebook from my so-called "fellow military spouse friends": 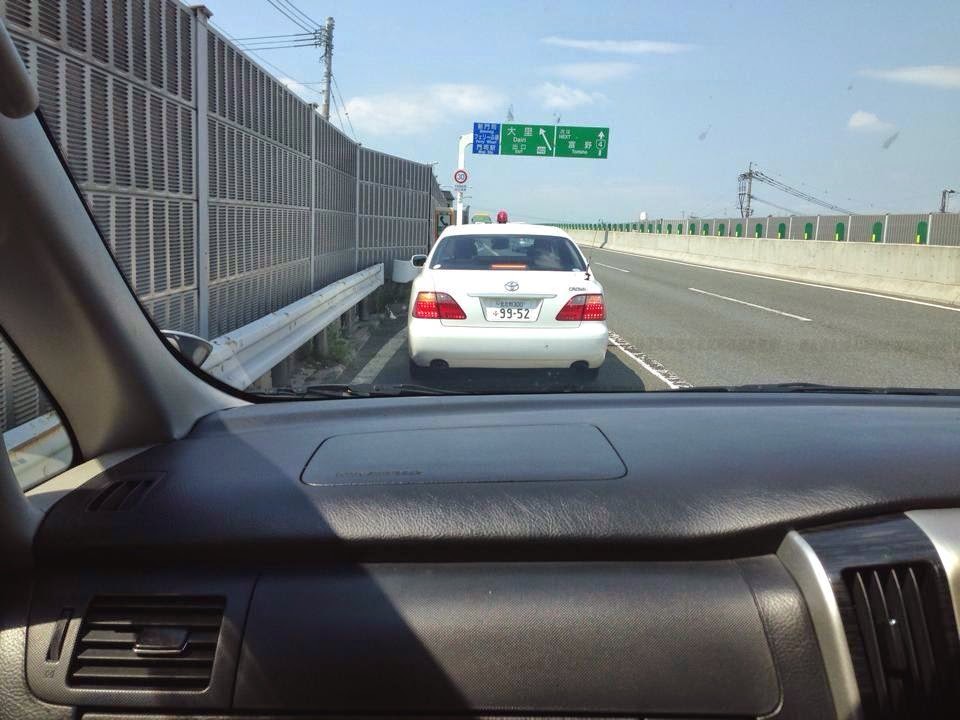 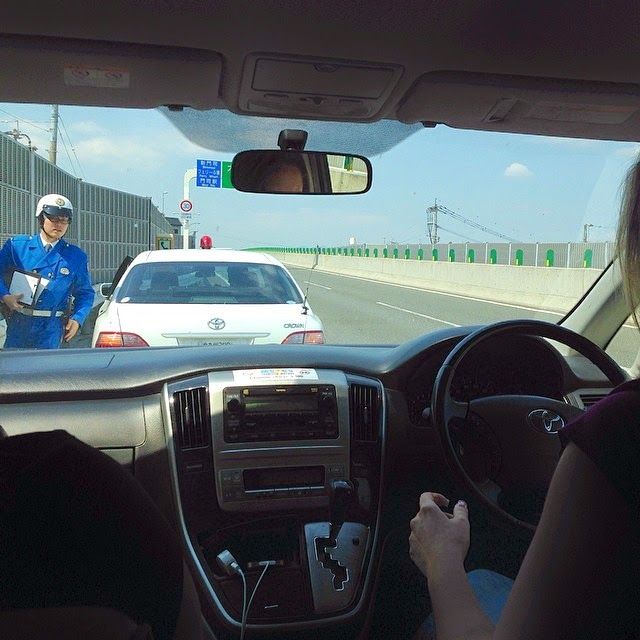 While the evidence doesn't show it, there were actually two cops in the unmarked car. And note that the Japanese pull you over and park in front of you, not behind you. You can see by my body language that I was a bit stunned. And, as you can see, the road looks a lot like a highway and I had been passed by a truck a few moments before this. Apparently the speed limit drops significantly here. And since we were busy looking for the wisteria tunnel garden's exit, I guess I wasn't paying attention to how fast I was going. So I can neither confirm nor deny that I was speeding. But I can confirm that I had a van full of American women who were snapping pictures with their iPhones. Well, a van full of American women and one Japanese lady, who, as I will explain later, was not going to be helpful in this situation.

So, the two police officers greet me at my window, each with a smile. I give a little wave and say "Konnichiwa!" in my brightest, happiest, "I'm a dumb American and I'm really sorry about whatever I did wrong" voice. They asked me if I spoke Japanese (at least I think that is what they asked, which was later confirmed by the Japanese woman in the car after the incident was over) and I told them I did not. Meanwhile, I am wondering if they are truly going to "detain" me in the back of the police car while they write up my ticket and call PMO (cops on base), how awesome those photos would be for future employers to see on Facebook, how are the rest of the ladies going to get home when I am the only authorized driver on the rented van, and how much is this ticket going to cost me (rumor says between $300 and $400)? Oh, and will I ever be allowed to drive in Japan again and how is that going to affect the adventures I want to have, galavanting around the country? Can I get deported for this? How pissed is the spouse going to be?

Lots of things are racing through my head during this 3-second exchange.

After my cheerful greeting, Cop #1, the spokesman, looks at Cop #2 and then back at me. "Speed is 60..." his accented English trailed off and he looked at Cop #2 for help. "Kee... kel..." he started to say. Cop #2 looked baffled. I decided I'd help them out: "Kilometers?" Cop #1 says, "Hai. (Yes). Go slower." I pull the typical dumb blonde move, one I have pulled in the States and looked at my speedometer, and then for a sign on the road, and then back at my speedometer. Now, you may be thinking that this is an act, to look more stupid and pitiful than I really am. I assure you, this appearance is not intentional. Logically, I know that my speedometer will not tell me how fast I was going five minutes before, especially when I am stopped on the side of the road. But, the blond hair I have just can't seem to be controlled by logic when cops are involved. I spit out one of the few Japanese phrases I have mastered in my time here: "Gomen asi (I am sorry)." And then, because I guess the blonde thinks that it sounds even more sincere to say it again in English to men who don't understand the language that well, I repeat myself, with emphasis: "I am really very sorry." And I was. Yes, I tend to have a lead foot, but I try not to cause an international incident with it.

Cop #1 nods and starts to move away "OK... dozo." Dozo means, go ahead. I was set free! The two officers made their way back to the car, and turned off the cherry light... it dropped in to the roof of the car. And off they went, pausing for a break in traffic. Relieved feminine chatter filled the van, my own chatter included. While I waited my turn to merge in to traffic after them, I spun around to my Japanese friend, Chie, who was seated behind me. Her eyes were huge and she looked at me and quietly said, with awe: "You are lucky." Oh. Really? "You mean they aren't always this friendly?" I asked. "Nooo! No smiling. Very strict. You are lucky," she said.

When I saw Chie a few days later, we talked about the "incident."

"Well, I was going to ask you to translate so I could understand what they were saying to me," I told her.

She looked at me and shook her head, "I was going to tell them I was Chinese."

What?! Oh, thanks! Some help you are!

But, then again, by not being able to speak Japanese, I was probably more trouble for the cops than the speeding ticket paperwork would have been worth. Soooo... I did not waste my foreigner "get out of jail free" card, and was much more cognizant of the speed limit. So, if the officers ever happen to read this... thank you and lesson learned: Pay attention to changes in the speed limit even if the road still looks like a highway and other vehicles pass you. But I am still not sure if the ladies in the van will want me to drive on our little adventures any more. We shall see...

But once the excitement of being pulled over by the Japanese highway patrol was over, we were only about a half an hour away from our final destination: The beautiful wisteria gardens. Here is the info and directions provided by Iwakuni Explorer, which is where I got my information. And then I will let the photos speak for themselves: 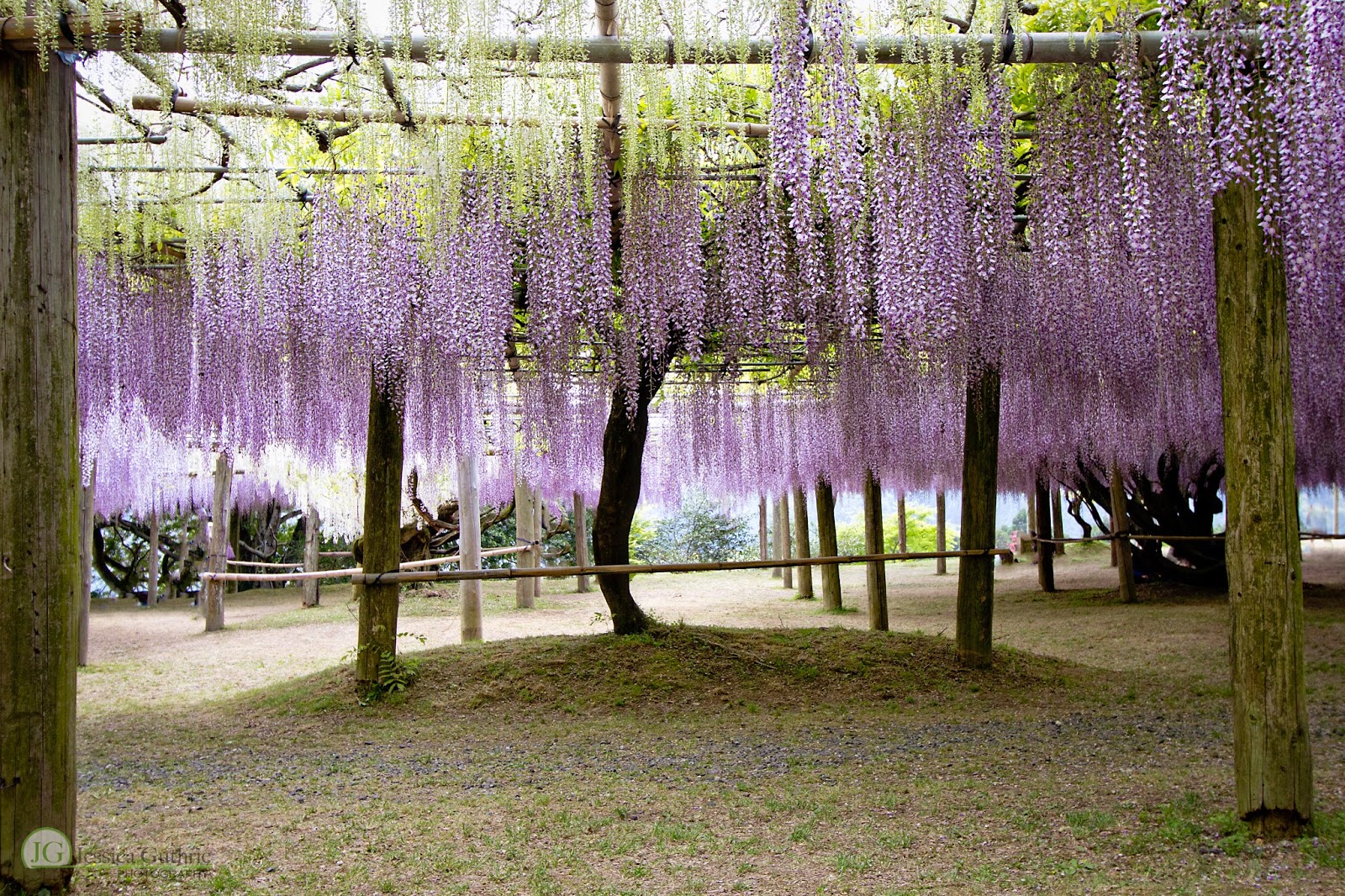 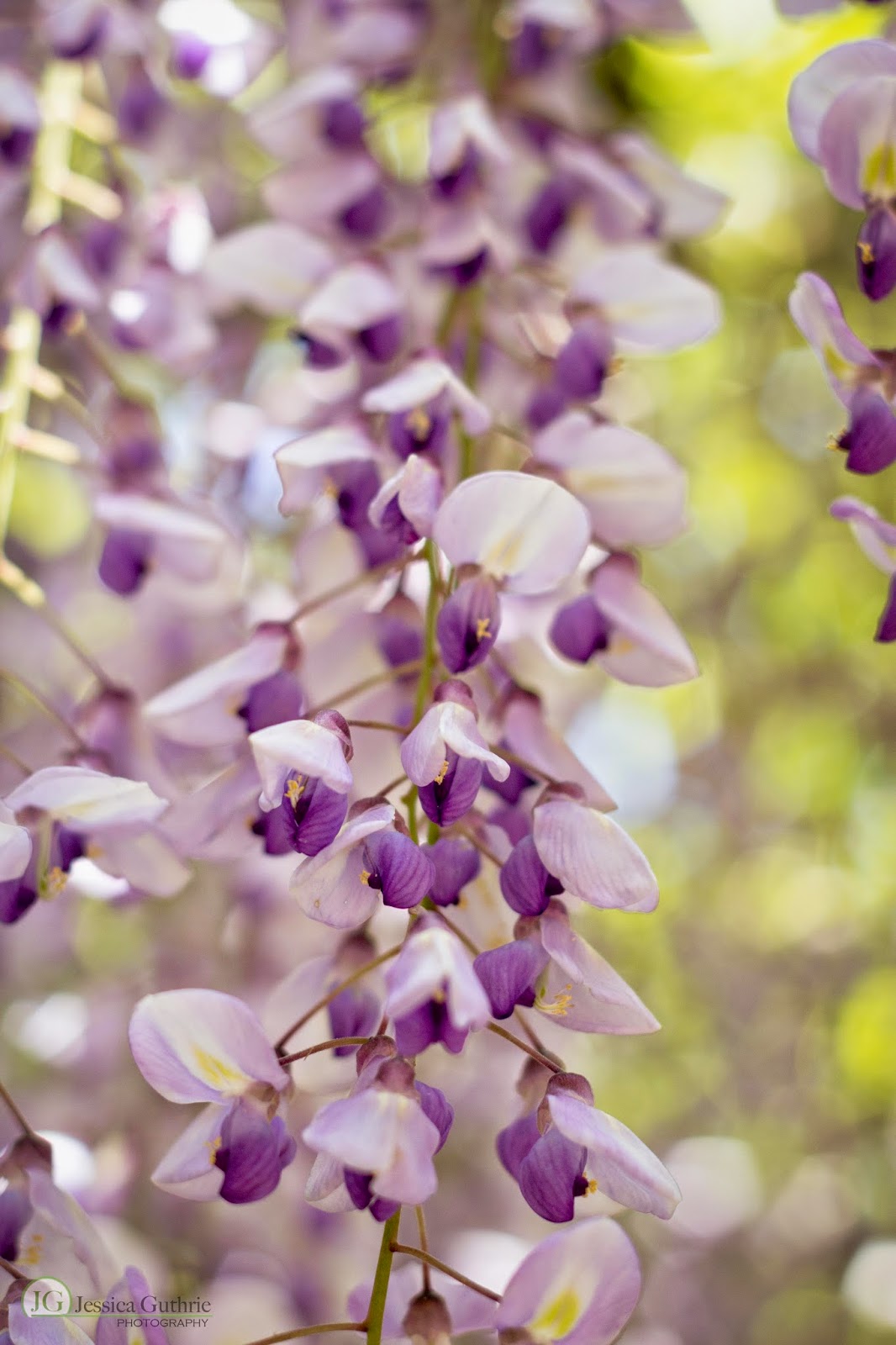 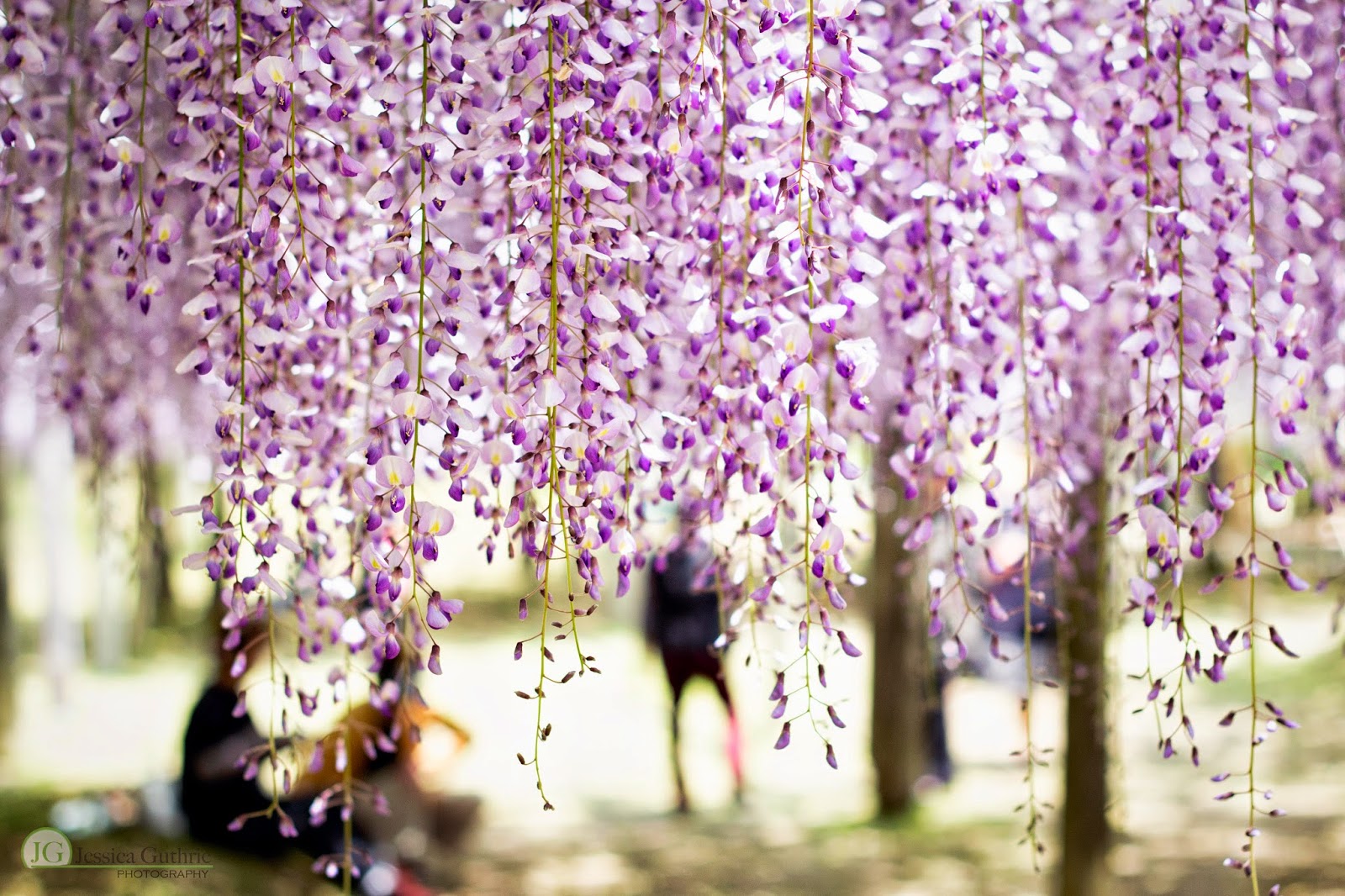 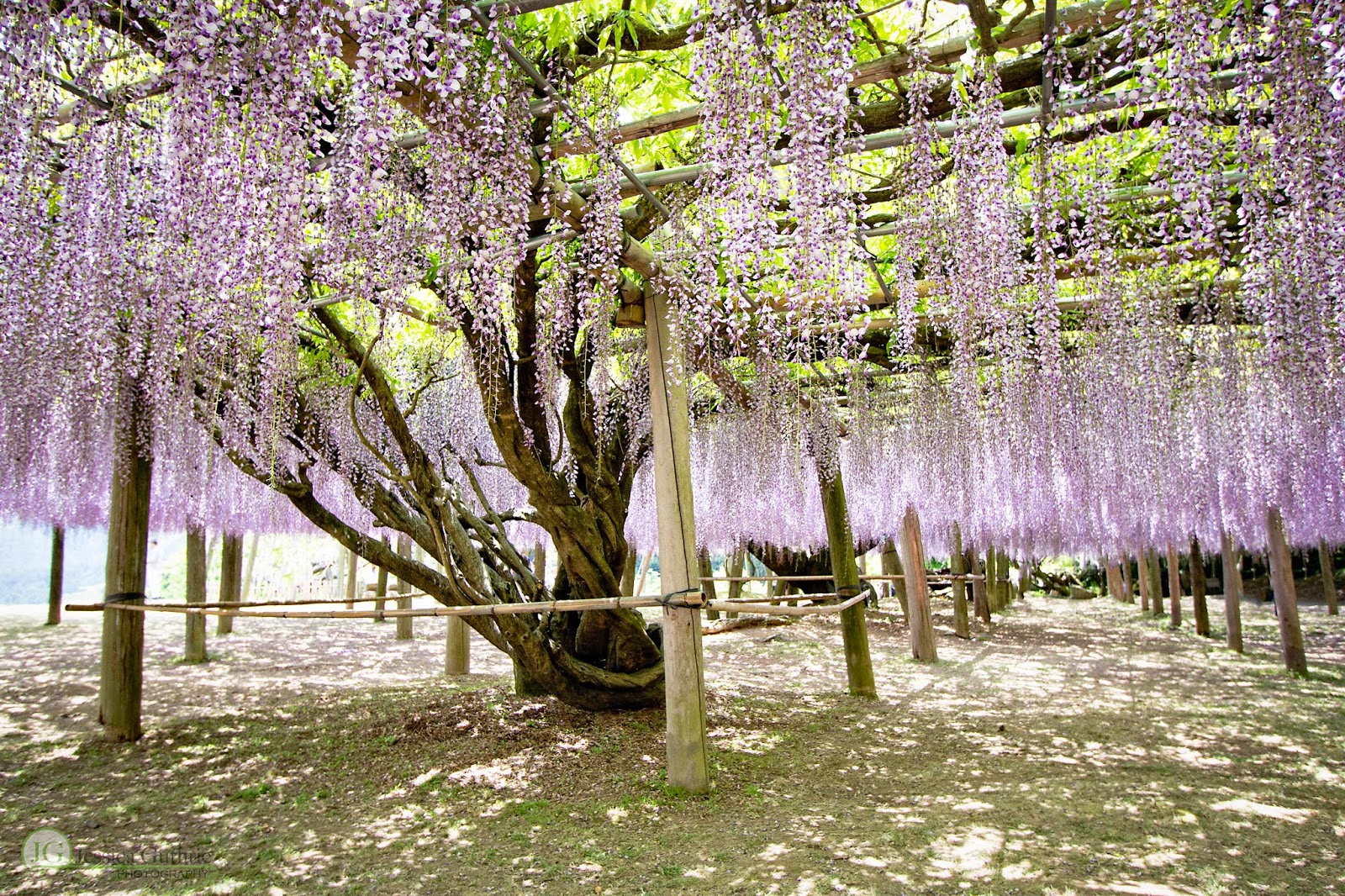 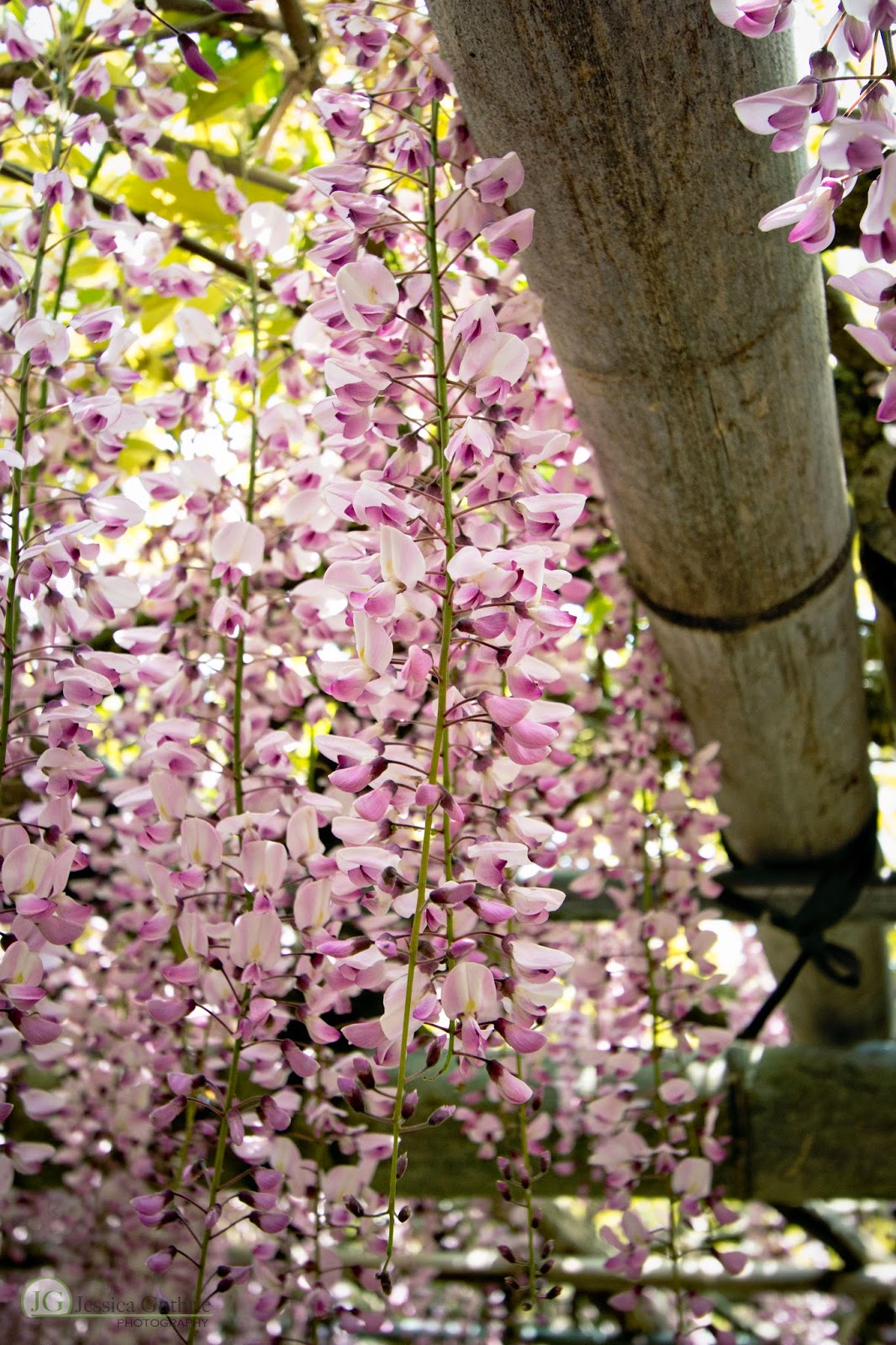 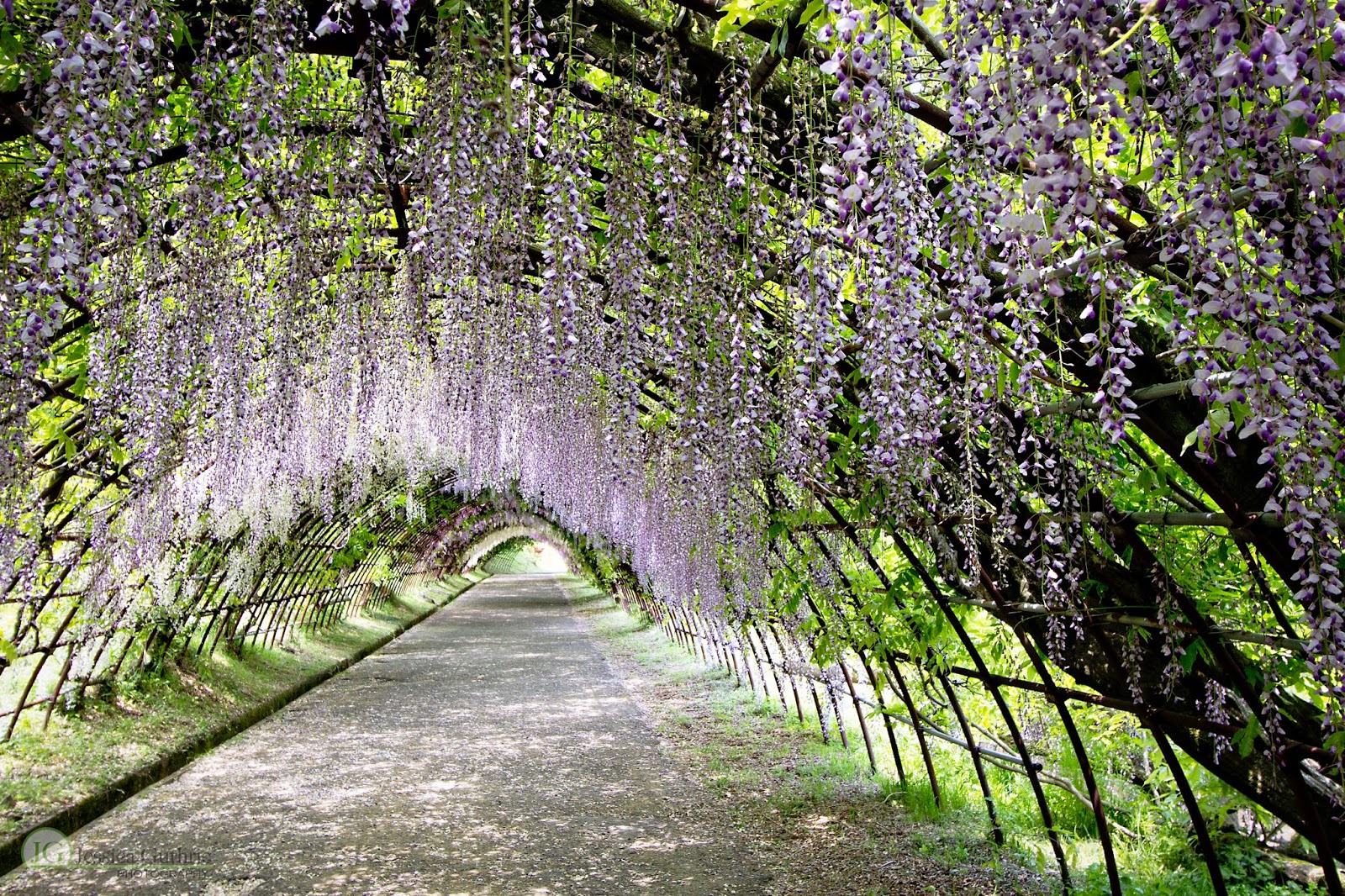 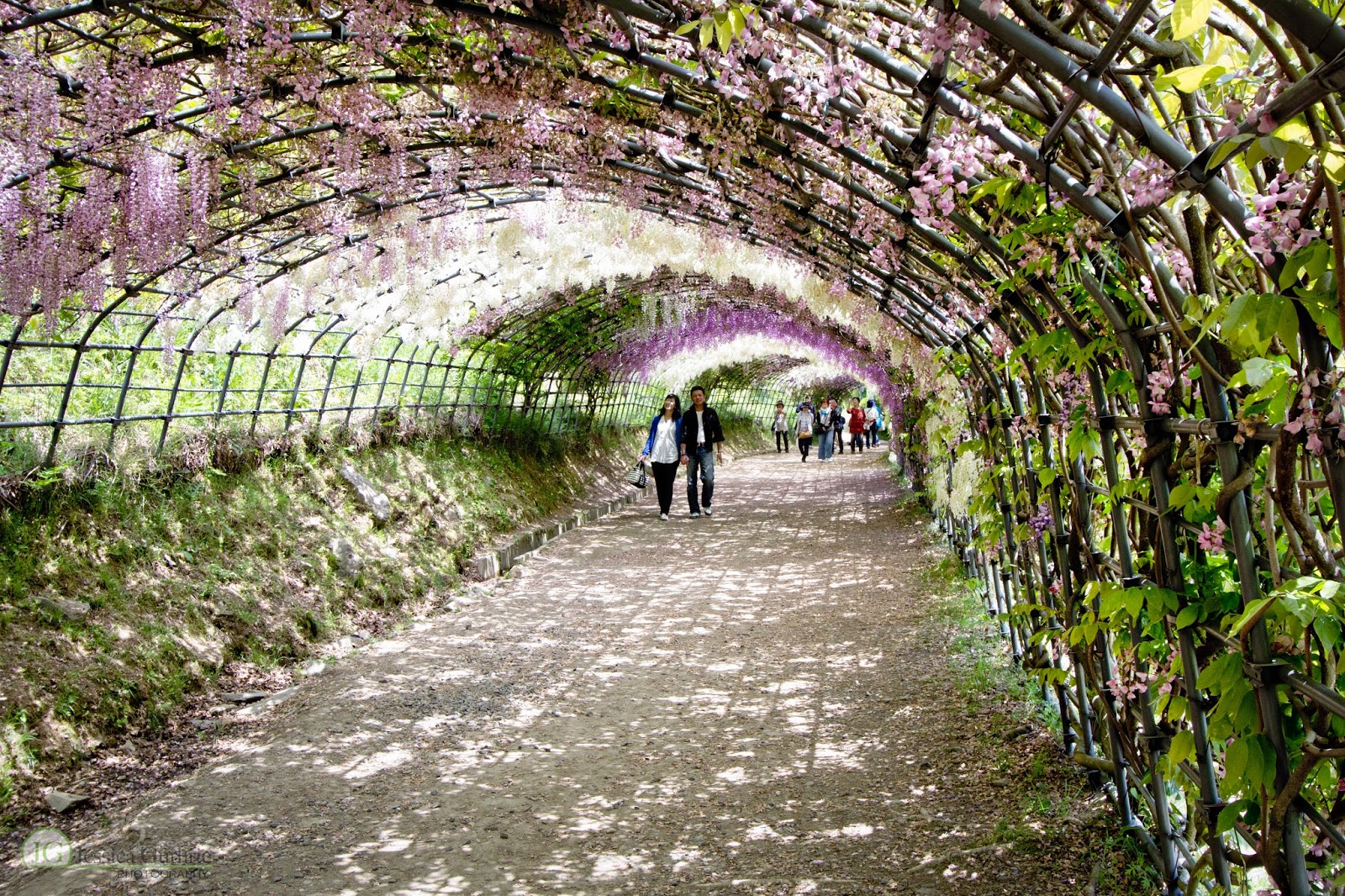 And yes, this little shack below is the entrance to the gardens, where you pay 1,000 yen ($10) to enjoy this beautiful place. We happened to get there on a partly cloudy/partly sunny day, and leave just as storm clouds were rolling in. This park is blooming around the last week of April and first two weeks of May, but keep in mind that the first week in May is Golden Week and many Japanese have the week off and travel with their families... tourist attractions like this get very crowded. 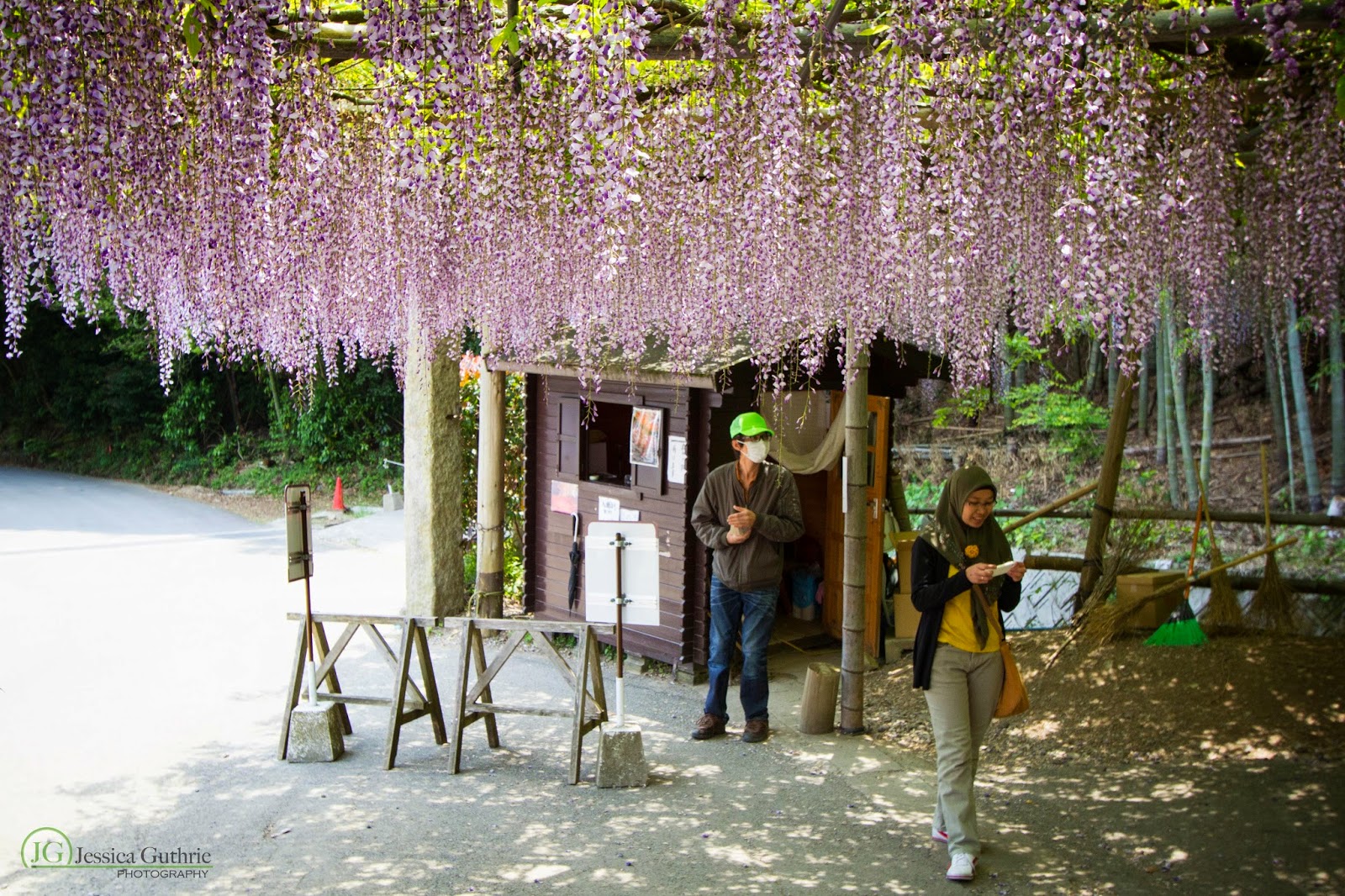 And, I took portraits of the ladies, and asked them to snap mine, as well. I needed a new headshot for my modeling career, LOL. Or maybe for my mug shot the next time I get pulled over. 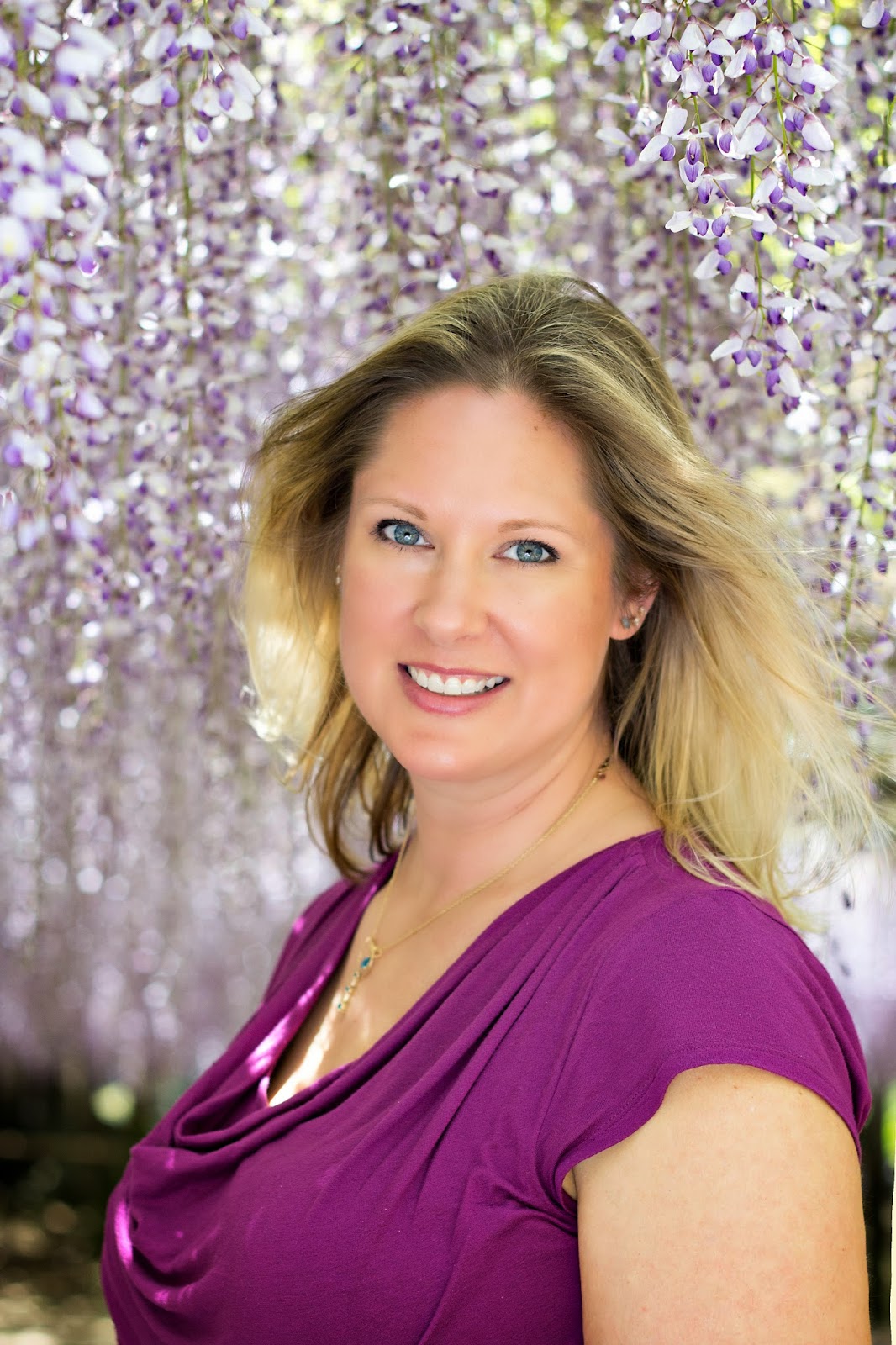 And no, I did not bring a fan with me to blow my hair back. It just happened to gust as the picture was taken... bringing those storm clouds with it. And yes, I wore the purple top intentionally... a good photographer always plans ahead. ;)
Posted by Jessica Guthrie at 5:12 AM