Nagasaki Road Trip Part 2: Peace, ice cream and the quest for an arcade...

Note from the Blogger: I highly recommend that you read the Nagasaki posts in order. There are references that build on each other and you may not get the full effect of my attempts at humor otherwise. Click here for the previous post. 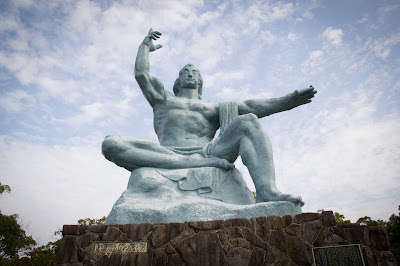 For those who are not knowledgable about American history, to end World War II in 1945, America dropped two atomic bombs on Japan, one in Hiroshima, and the second one a few days later in Nagasaki. Of course, as many Americans are, I am conflicted by this history and sense of responsibility that comes with it. Of course, part of me thinks, "Well, Japan started it! They bombed us first!" (Again, those of you unfamiliar with history, Google 'Pearl Harbor.') But once my inner 5-year-old is scolded by the 37-year-old me, the guilt of the death and destruction in the wake of the bombings niggles at me. That's also the part that makes me wonder if the Japanese people I meet secretly hate me and are planning some intricate plot for my demise. Or maybe I've been reading too many espionage books lately....

Either way, I have made it a point to visit both Peace Park and Atomic Bomb Museums, and take my family with me. I think that is important for people to see the effects of the bombings, so that, perhaps, better choices can be made in the future. Of course, I was not alive during the war, much less involved in political negotiations, so maybe the best decisions of the time were made. Do I think that many American lives were saved by the bombings? Yes. But, at the expense of innocent Japanese lives. And, if teaching Global Communications courses have taught me anything, it is that the world is getting "smaller." So much of what happens in one place affects others across the world, socially, economically, environmentally, etc. After all, there are motorcycles washing up on the beaches of Canada after the Japanese tsunami. If that doesn't tell you that the world is smaller than we think, then I don't know what does.

So, in the interest of teaching my kids about the good and the bad in the world, and to better enhance my understanding of the country I am currently living in, the main attraction of Nagasaki for me was the Peace Park and museum. Of course, being only an hour from Hiroshima, we have been to that Peace Park and museum a few times. Nagasaki's is smaller, and not nearly as well organized, as far as the locations of the park and museum, but it is still worth seeing. 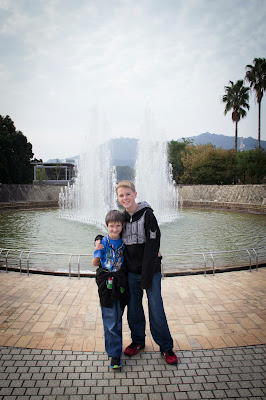 The Nagasaki Peace Park is the the location of a former prison. All that is left are the foundation and small low stones from the walls. 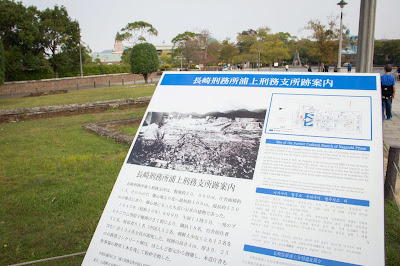 It's not nearly as awe-inspiring as the Hiroshima dome, but the absolute destruction is obvious. As you walk farther in to the park there are the requisite anti-nuke volunteers requesting signatures to stop the construction and use of nuclear weapons. You can see their tables lined on either side of the walkway. They are not pushy, like some American petitioners are, which is reassuring, since the spouse can't sign them since he is a member of the American armed forces. I didn't sign them because I like to keep my options open... just kidding.

And I thought it was a little too chilly to wear my mini skirt to the memorial, so I left mine at home, but more power to that Japanese lady... way to brave the elements! 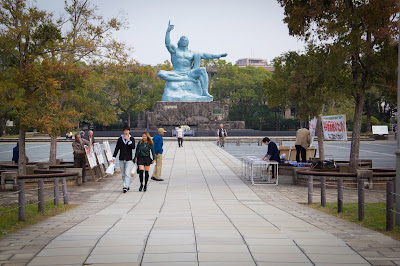 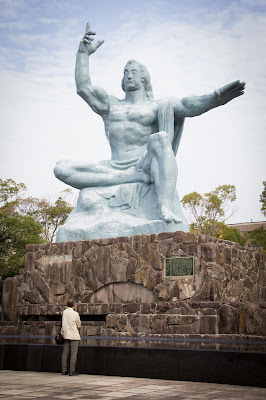 According to a Japanese travel site, "sculptor Seibou Kitamura, a Nagasaki native, created this statue as a symbol of the divine love and mercy of Buddha. The raised right hand points to the heavens to signify the threat of atomic weapons while the left arm is raised horizontally to represent the wish for peace. The figure's eyes are lightly closed in prayer for the souls of the atomic bomb victims." The artist is also quoted on a plaque in the park. 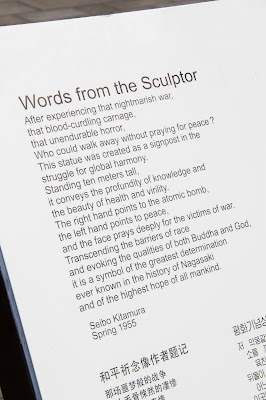 There were plenty of other sculptures and statues dedicated to the bombing victims displayed around the park. These were two of my favorites: 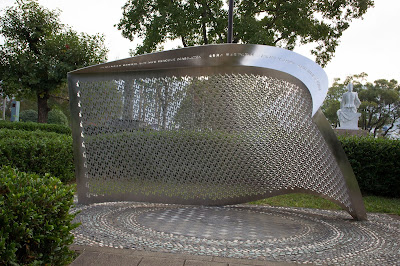 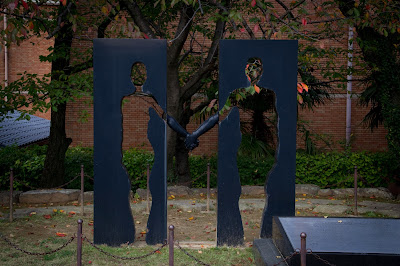 Like Hiroshima, there is a memorial dedicated to the children who died, complete with chains of paper cranes. 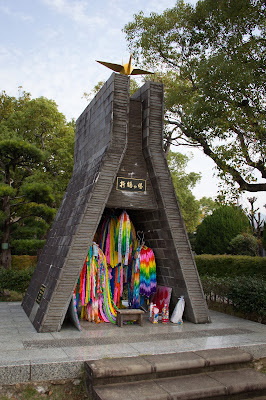 My family complained very little as we perused the park, although I was asked several times what time I planned to leave for Sasebo. Will and Xan were eager to shop for Skylanders at the NEX (our exchange did not have any) and play in the video arcade (our base does not have one kids can access). Rodney just wanted to get back to "America" (in other words, a base) as quickly as possible. He's not really a ramen noodle and public transportation kind of guy.

The museum was about a 10-15 minute walk from Peace Park, but tucked away. You definitely need a map to find it. Even the road signs were somewhat helpful, but not as exact as I would have liked, being directionally challenged. After walking a slightly steep hill, we managed to find the museum... we just followed the tour buses that drove past us. 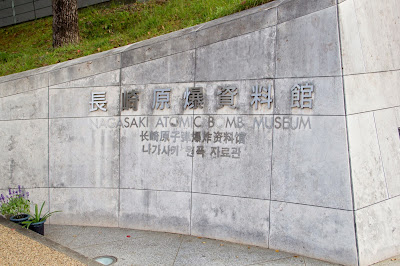 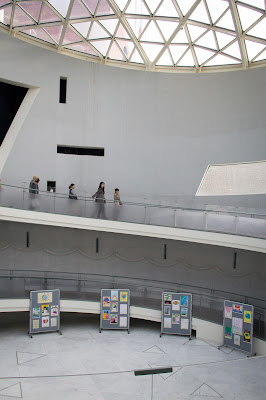 The Nagasaki museum seemed to focus on more of the Japanese military's history and role in the war than the Hiroshima museum did. But everything else was quite similar, only with the details of the Nagasaki bombing. A slightly different type of bomb was dropped on Nagasaki than Hiroshima, but being with three males who wanted to do what they had to as quickly as possible so that they could move on to an arcade, I did not bother to read the literature on the scientific differences. But it's all there.

Below is a replica of a church that was destroyed in the bombing, lights dim and brighten in time with a video that played in Japanese. 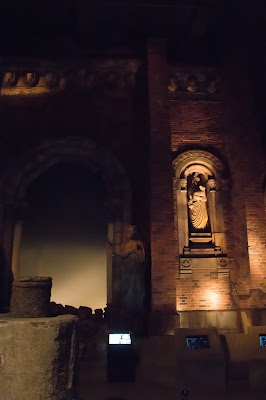 The kids were very interested in how these glass bottles were melted together. 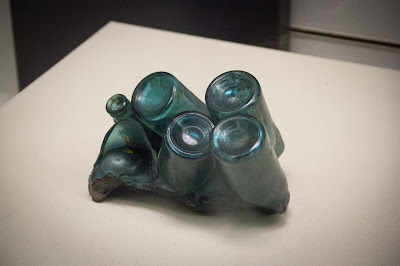 I think this photo below tells the story of the bombing aftermath very well. 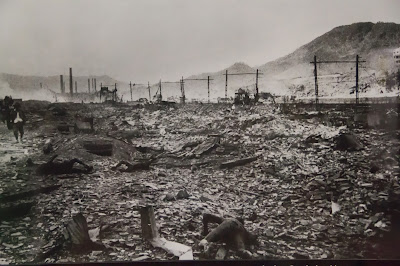 The bomb hit at 11:02 a.m. Like the ones in Hiro, the clocks that weren't destroyed completely stopped working at precisely that time. 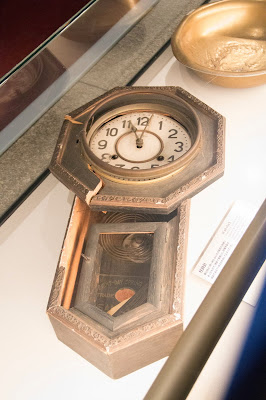 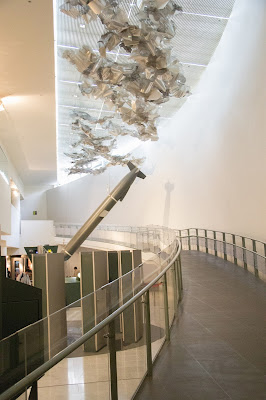 As we left, we were much more sober in our attitudes than we had been when we arrived at the museum. There is plenty to consider.

We hopped back on the trolley system to head back to the Glover Hill area. It was about a 20- to 30-minute ride, but the Nagasaki map we got from ITT on base made it very easy to see where we had to switch trolley lines, etc. Also, our hotel sold adult and child all-day trolley passes, which made trolley hopping more affordable. We checked out the Oura Catholic Church, which was built by French missionaries in 1864 and considered the oldest church in Japan. 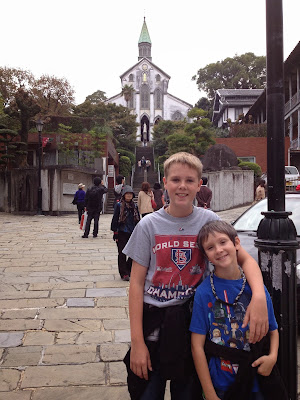 Ice cream break! Ice cream is sold in every tourist spot in Japan, think, and at all times of the year. The ice cream break kept the boys' mouths busy so they would stop asking me how soon we were leaving for Sasebo. 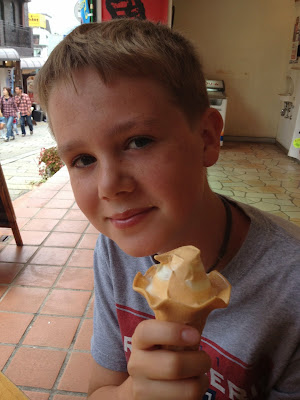 Like any good tourist spot, there are American' license plates for sale for about $11. Just kidding... I have not seen these for sale in Japan before and found it odd that they were on sale here. I've been able to find them in the States at fleamarkets for as little as $1. I think I have found my next business venture... 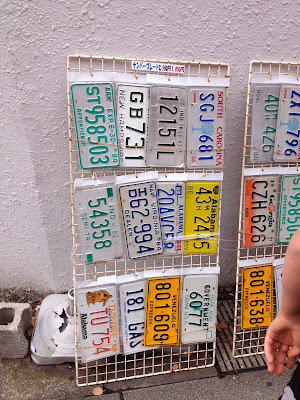 We had lunch in Nagasaki's Chinatown. When I posted this photo to Facebook along the way, my father cleverly pointed out that it looks very much like Chinatown in San Francisco. Maybe if you've been to one Chinatown, you've been to them all? Either way, the food was delicious. 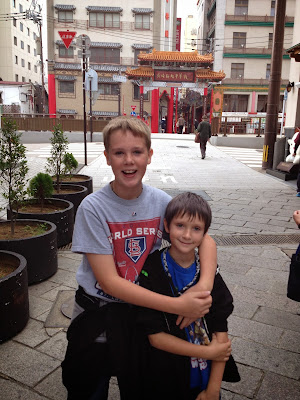 And, finally, to the mens' delight, it was time to leave for Sasebo, which is about an hour from Nagasaki. The kids moved toward the car faster than I had seen them move all day, and the spouse did not seem to have to work so hard at faking being happy. He knew the arcade the kids were excited about was overlooked by a place with adult beverages. I have to admit, a margarita sounded pretty good... 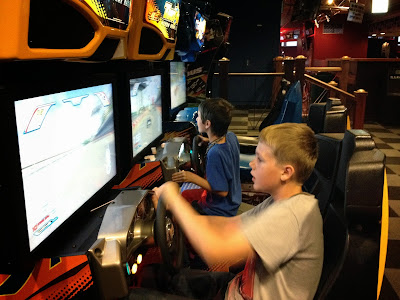