So the spouse took a day off of work to join me on one of the cultural trips I have enjoyed the past year... yes, we have been in Japan a year now, with two more to go. Time flies when you are having fun!

This cultural trip was a ride on the Toko Toko Train, a touristy trip that the kids on the tour just loved. If you are a fan of beautiful country views and local artists' designs made from rocks and black lights, then you'd love this trip.

Our trip actually was very bug-inspired, but we had no idea this would be the case when we started out Friday morning.

The Toko Toko train follows an old mining railroad line that is no longer in service. To get to the Toko Toko Train, we first took a train, the Nishiki-gawa Seiryu-sen, from the Shin-Iwakuni station to the Nishiki-cho Station, where we then caught the Toko Toko train, which stops at the Souzukyo Onsen Station. An onsen is a community bath, often found near hot springs and used by Japanese people for better health and relaxation. I hope to visit an onsen before I leave Japan.

The claim to fame for the Nishiki-gawa Seiryu-sen train line, which is a small train line that services more remote parts of the Yamaguchi prefecture we live in, is that they have four different train cars, each painted with a different theme. Because our fearless leader and cultural tour guide, Akie, had called ahead to let the otherwise unsuspecting Japanese train folks know that a bunch of Americans were coming, the usually one-car train actually had two cars... the pink one and the yellow one. I think the others are green and blue. 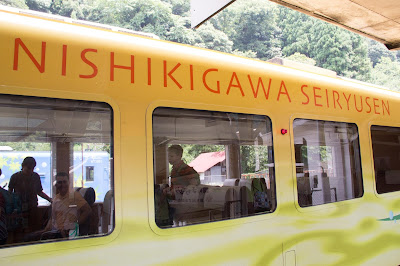 The Toko Toko Train is actually not a train, but more of a trolley that doesn't require rails. It was painted like a ladybug. 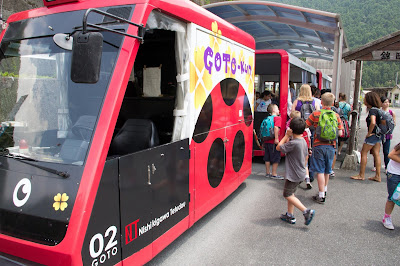 The Toko Toko train chugs through the Japanese countryside and drives through two tunnels. The first is lit with black lights and features the artwork of local artists and children. Here are some of the designs, so you can get a feel for it. This section of the tunnel is 1,796 meters, or a little over a mile long. We were able to get out and take a close-up look at the designs. There were several bug designs, by the way, like butterflies, ladybugs, spiders and dragonflies. 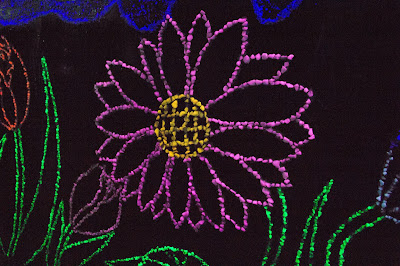 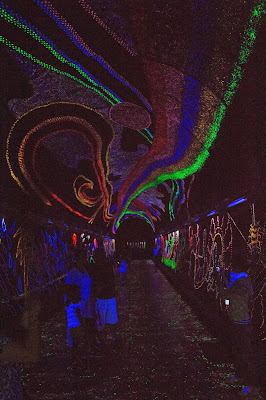 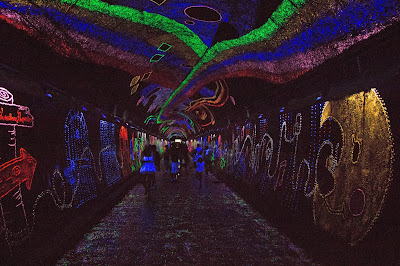 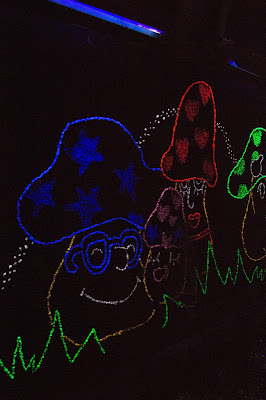 We jumped back on the train and headed back out in to the countryside. We were going too fast for me to get any really great shots of the scenery, unfortunately. We also went through a second tunnel, full of bats, but we were not given the opportunity to get out and take a close-up look at them. In fact, I only saw a handful of bats because I was seated in the center of the train and the train had an opaque roof I could not see through. Bummer. But, the good news was that I was able to explain to Akie about the word "guano" and what it meant, and she was able to use it during the tour. Good times. :)

As we approached our final stop, we saw a wasabi field. This spicy hot veggie is related to cabbage and is a crop this area is known for producing.

On the way home, we stopped at a souvenir shop, where Rodney and I got some ice cream... and some pet beetles. The shop manager was apparently overrun with rhinoceros beetles (a type of harmless-to-humans scarab beetle) he couldn't sell, and he saw a busload of unsuspecting Americans and offered them to us. The kids on the tour, and I, were thrilled! I have been wanting to give beetles a try as pets, but Rodney has forbidden me to buy any. These were FREE. So, I acquired a pair of beetles for my kids (me) to enjoy. Rodney was disgusted and appalled and was so adamant about not getting free beetles, that he offered to allow to me to get a cat. Wait... what? Mr. "Cats Suck" is willing to have one in our home? He must really not want any beetles. Even more of a reason to get some! Of course, this is what he thinks was going on in my head during this time. But, really, I simply wanted to experience owning a pet beetle like many Japanese families do. When in Rome, ...and all that.


While the beetles were free and came together in a small cage, I felt bad for them being in such close quarters. I went to the Daiso (Japanese dollar store) and upgraded their cage from "small" to "large," according to the labels. I prefer saying that we upgraded them out of the apartment, past the single-family home, and right in to the McMansion. 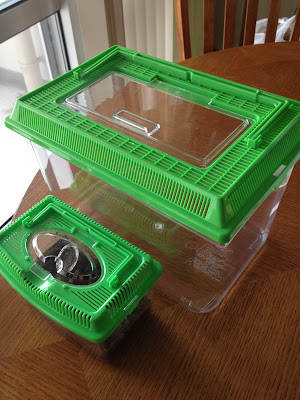 I also needed more insect mat, leaves, a piece of climbing wood and some carbon (because Rodney said the bugs might start to smell). These things were all available for responsible beetle owners at the Daiso. 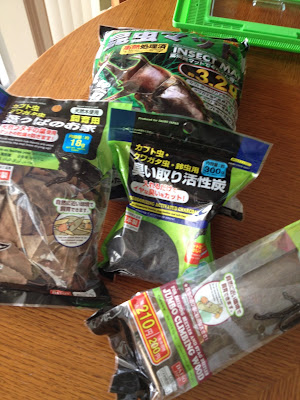 Below is a bag of fancy dirt, called insect mat... 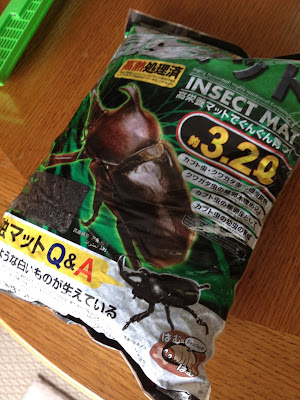 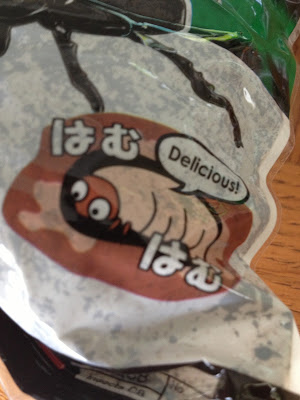 ... because it is "highly fermented, highly nutritional and contains protein." Good news for grubs. 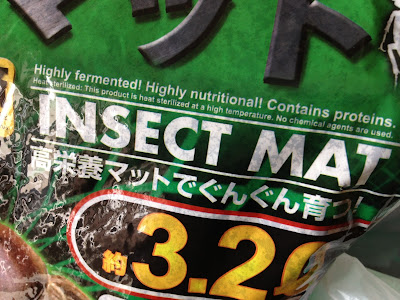 The handy diagrams showed us exactly how we should set up our beetle McMansion... 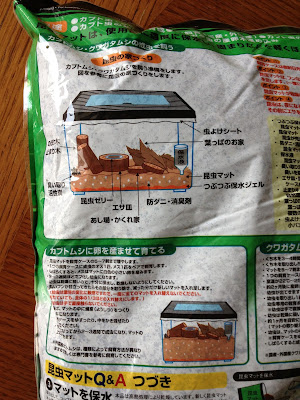 ... and this one showed us how to place the leaves in the McMansion. 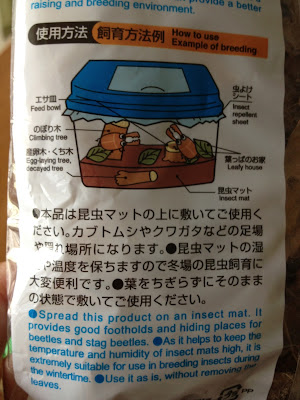 And of course, some key points on breeding your bugs were on the bag below. Rodney says we are not doing this. I say let nature take its course. We might be fabulous beetle breeders and never know we had such a talent. 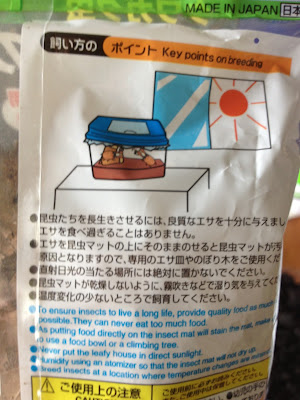 The is Clyde hanging out on my hand. It's funny... his long front horn is slightly curved to the left. Does this mean he dresses to the left in the beetle world? Maybe I should ask Bonnie. 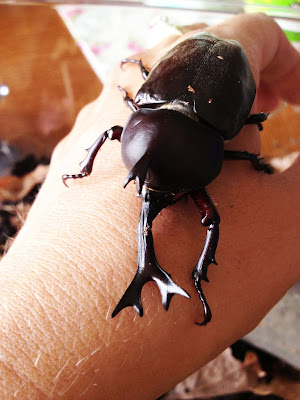 I put Bonnie and Clyde on the climbing stump when I moved them in to the McMansion. Like a good man, Clyde immediately went for the food. 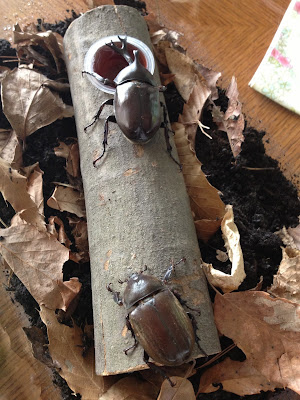 Bonnie turned around and hid from Clyde. 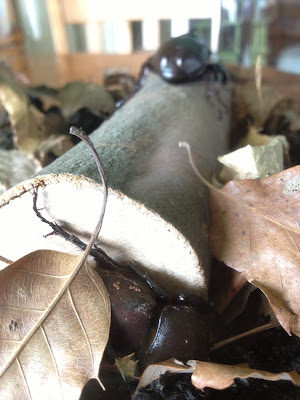 I'll keep you posted on the next chapter of the beetle saga...
Posted by Jessica Guthrie at 6:54 AM