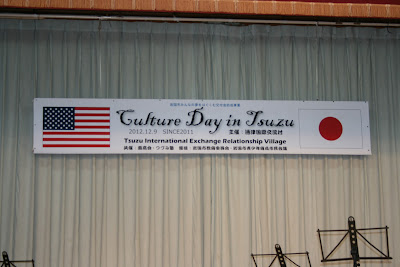 I finally took my kids on a Cultural Adaptation tour. While I have felt badly about leaving them out of my fun, most of the tours are on Fridays while they are at school. I see my solo excursions as a chance to pioneer these adventures for my family, and then decide on which ones are best to take them as a family at a later date. We went on a youth cultural tour Sunday, which was 500 yen per person, to the town of Tsuzu, which is about a half-hour from the base, but only because traffic is slow. We never left the greater Iwakuni area on the bus as we visited Tsuzu's community center.

At this 2nd annual event, the Tsuzu mayor and community welcomed about 70 adults and children stationed on MCAS Iwakuni and shared their New Year cultural events with us.

A dozen or so Japanese middle school students from the Tsuzu school were there, and each family was paired up with one. Our student was 13-year-old Nozomi, a very soft-spoken girl whose English was limited.

But despite the fact that we didn't communicate through language well, we still managed to do a decent job of creating the traditional Japanese new year wreath, called a shimekazari. You hang this on your door or the front of your car to welcome the new year and keep out the "bad" of the past. 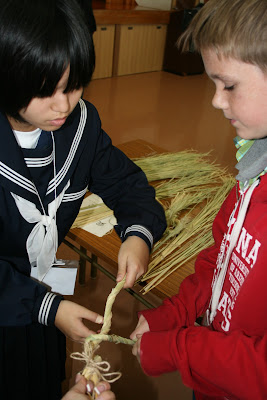 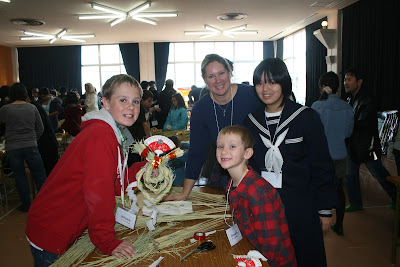 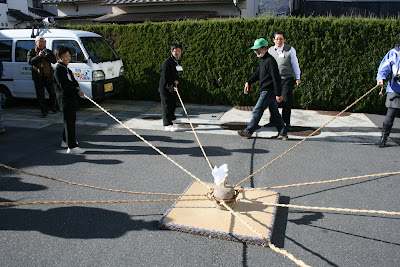 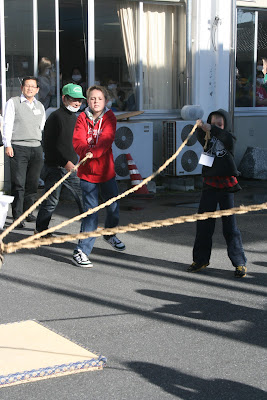 Next up was pounding rice in to submission. The American men in the group were invited by the Japanese men in the group to pound the rice first. After the 10-minute testosterone show I'm sure you can imagine, the kids had a chance. Here is Will's turn at hammering rice: 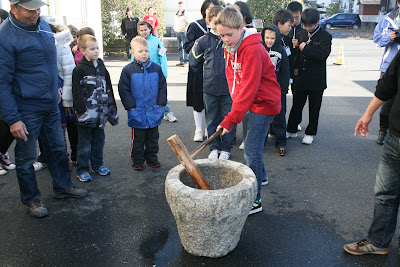 This rice pounding with heavy wooden mallets is also ceremonial, and a chant goes along with it to. In this process, the rice has been mixed with steamy water and turns in to a play-doh-like mush. This mush is then made in to tasty rice cakes. We tried three in all: One with a sweet soy sauce, another with peanut oil that reminded the kids and I of Honey Nut Cheerios, and a third that had sweet bean paste in the center. While I thought all of them were palatable, the soy one was my least favorite (I am not a fan of soy sauce to begin with) and my most favorite was the sweet bean one (I usually dislike beans, but have come to enjoy this sweet bean.)

Nozomi was one of for students who played a sort of Japanese harp. It was very pretty and we were able to listen to the concert while our hosts shared American favorites with us: popcorn and cotton candy. 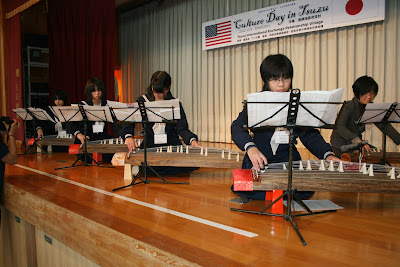 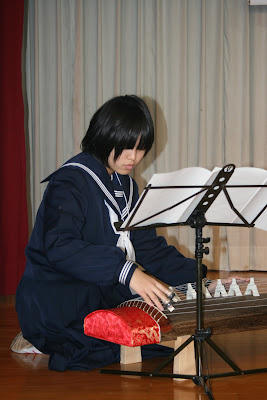 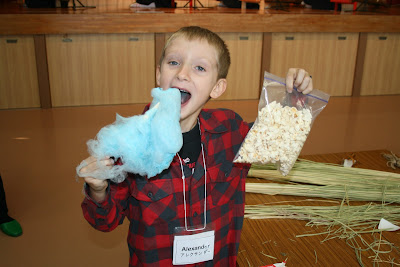 The students also shared some of the history of their city. Tzusu has about 6,000 people and is known for the Tzusu river and what is considered one of the most beautiful wells in Japan. It also has a rich samurai history. The students gave the presentation in Japanese, which was translated by Mike. 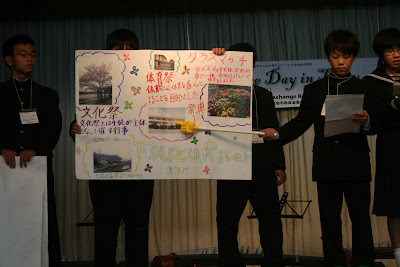 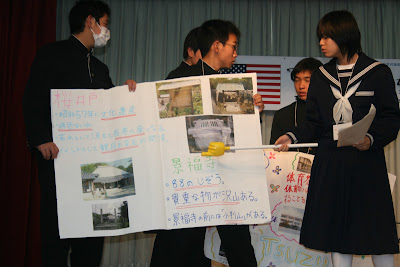 Now that we are back home, I have hung my (ugly) shimekazari by the door of my apartment, hoping that the design and construction aren't representative of the kind of year I am going to have in 2013. The kids seemed to have learned a lot and especially enjoyed the food (of course!). I enjoyed learning how to make the shimekazari, but want another crack at it. Maybe next year...
Posted by Jessica Guthrie at 10:05 PM