This week should be quieter than most have been thus far in our Japanese adventure, but I better stop with that - I don't want to jinx myself. I am enjoying the calm, to be sure. But here are some follow-ups to recent posts I have made, just for those of you who enjoy following the Guthrie Family Saga:

This goes on the premise that home is where ever the Marine Corps sends you. So, home is currently Iwakuni, Japan and the spouse got home Monday evening, after a 24-hour delay, thanks to United Airlines, which couldn't seem to leave the great city of Palm Springs on time. Rodney spent the night in San Francisco, but was in no mood to go sight-seeing, of course. But he made it home safely, and that is what matters. He's settled in, both at home and at work. He finds the way I decorated and organized the house "cozy" and loved the fact that I had his car, Snowflake, registered, washed and ready to go for him when he got back. Snowflake will be featured in a future post, because she deserves her own story. I find her amusing.

Rodney, who has been very anti-Japanese-pet, has warmed up to Molly. After all, how can you resist that face of hers? Here's a shot of the spouse and Molly getting better acquainted: 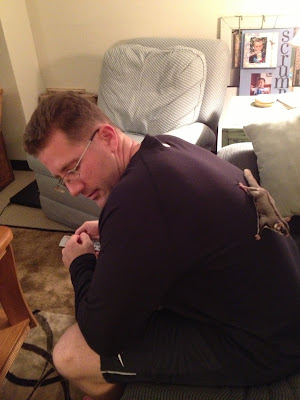 And speaking of Molly...

Molly has been in the family for a little over a week now and we love her more each day. She's settled in, as well, and is more curious and calm that she has been. She still isn't sure she wants to leave her cage, but with watermelon as a bribe, she's stopped trying to hide as much. We take her out to enjoy her watermelon before the kids go to bed so they can see this nocturnal marsupial. 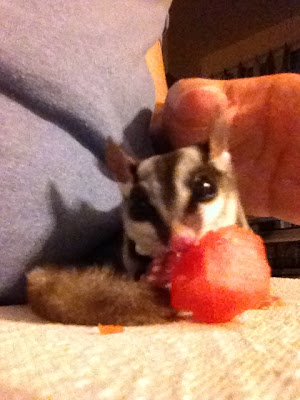 The "bonding" between us and Molly will take several more weeks, so, hopefully, she will grow to love us as much as we love her.

Seriously, if you have a computer and haven;' installed Skype on it, you are SO missing out. Even if your relatives live nearby, this is a great way to "see" them when you don't have time to get together. My mom (who lives in California) is visiting my mother-in-law (who lives in Illinois) this week (Side note: I know this is unusual and we are very lucky they get along. In fact, the kids can't understand why everybody's grandmas don't get along so well. Frankly, neither do I, but that's more philosophy and psychology than I care to delve in to at this point.) Below is a photo of the kids talking to "the Grandmas" the other day on Skype. The Grandmas had called to say hi - and to have me help them get the DVD player started. Nothing like Skype to give technical instruction to a couple of Grandmas half a world away! And it was hilarious hearing the kids say, "Grandma! Both of you!" when they tried to get their attention during the conversation. 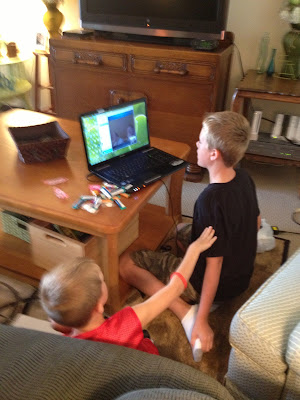 While Xan has had his gi (the white karate uniform seen below) for a month now, the sensei had run out of gis in Will's size and they needed to be ordered. They finally came in so, Will is now just as official as Xan in karate class - and I think they look adorable. But I am sure that is not the adjective they want to hear - especially when performing martial arts. 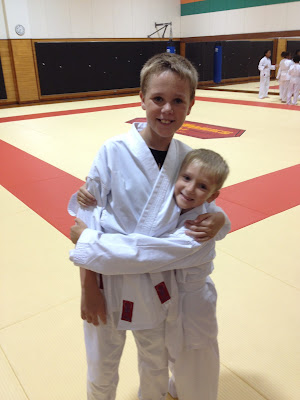 According to the scale this morning, I have lost about 14 pounds since changing my lifestyle just over 3 weeks ago. This has meant following the South Beach Diet and working out three times a week with the help of a trainer, It has not been overly fun, but it hasn't been nearly as bad as I had expected it to be. And if I keep losing weight like this, then I will definitely be motivated to continue, although the whole The Big C motivation wouldn't be terrible (the main character is a teacher who pays one of her obese students $100 for every pound she loses). I'd be $1,400 richer right now! But I did treat myself to some new sneakers and sport bras. LOL... I am sure the weight loss will slow down to the usual 1-2 pounds a week soon, but as long as I keep losing I'm OK. And, of course, thank you to all of you who have been so supportive!

This is not a typo. I know I already used this subhead, but it is, in fact somewhat true, yet again. I plan to fly back to the states at the end of October - as cheaply as possible. This means flying Space A - or space available. Think of it like flying standby, but you may not be on a passenger plane. You could be flying in the jump seat of a C-130 next to a humvee. Or, the flights going where you want to go may be full, so you have to wait until the next flight, which could be hours, days or even weeks later. It a crap-shoot, but, if the Space A crap shoot works out in my favor, it will cost me $29.10 to fly to Seattle from Iwakuni. And here is the official stamp that gets me on the Space A list: 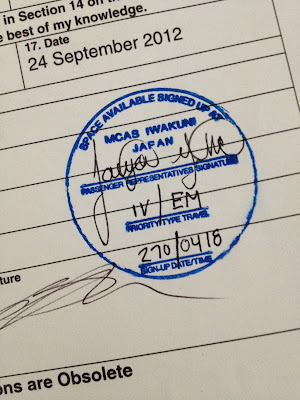 And don't worry: I'll be sure to post about my Space A flight adventure!
Posted by Jessica Guthrie at 11:06 PM